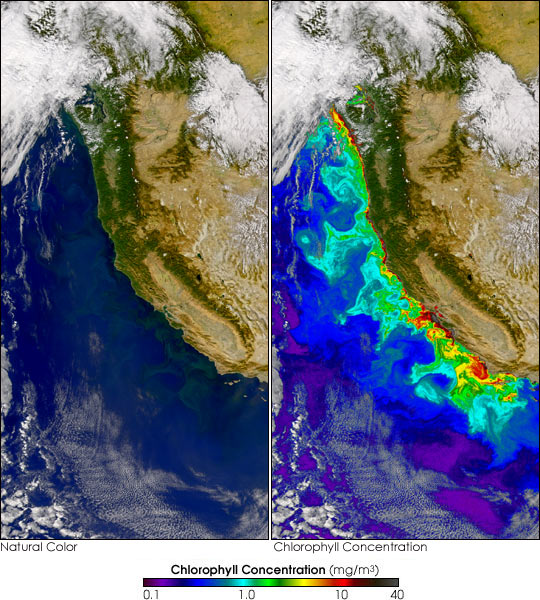 The Pacific Coast of North America teams with life because of the rich plant life supported by cold ocean waters. The thriving ecosystem is driven by coastal upwelling where deep ocean water pushes to the surface near the coast. Upwelling is not constant—it is controlled by the wind. When winds blow from the north, the warm surface water of the ocean is pushed west. Cold ocean water rushes up from the ocean depths to replace the surface water, carrying with it nutrients that had settled on the ocean floor. Called upwelling, the surge of nutrient-rich cold water nourishes tiny ocean plants called phytoplankton. These plants are a source of food for other ocean life.

On September 21, 2004, the Sea-viewing Wide Field-of-view Sensor (SeaWiFS) detected high concentrations of chlorophyll along the California, Oregon, and Washington shorelines—an indication that coastal upwelling was strong. An abundance of phytoplankton have colored the ocean waters dark green in the natural color image shown on the left. On the right, chlorophyll concentrations are shown, with the highest concentrations (dark red) near the shore. From the Strait of Juan de Fuca, which forms the border between Washington and Canada below the bank of clouds in the north, to the southern tip of California on the lower right side of the image, the entire U.S. coastline seems to be affected.