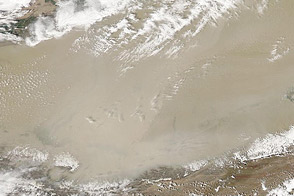 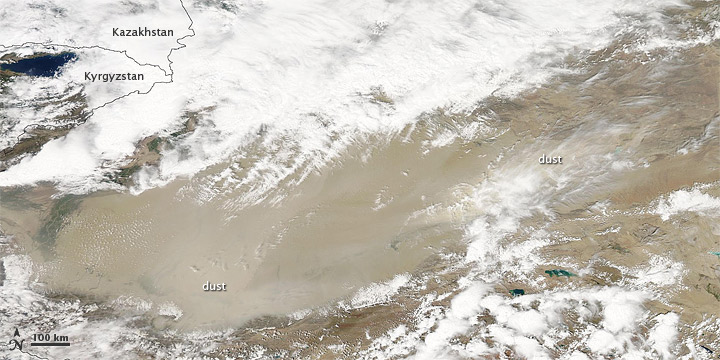 Dust Storm in the Taklimakan Desert

Dust and clouds blew over the Taklimakan Desert in western China on August 11, 2011. The Moderate Resolution Imaging Spectroradiometer (MODIS) on NASA’s Aqua satellite took this picture the same day.

Sitting inside the Tarim Basin, the Taklimakan Desert is the warmest, driest, largest desert in China, and it ranks among the world’s largest shifting-sand deserts. Sand dunes cover about 85 percent of the desert floor, some of them reaching 200 meters (650 feet) in height. The sand dunes provide plentiful material for dust storms, which often blow eastward out of the Tarim Basin.

Despite the dry environment, the desert does support some vegetation, which is apparent in the summertime. In this image, dust plumes along the basin’s southern margin hide vegetation in that region. Along the basin’s northern edge is a large cloudbank, which might be associated with the same weather system that has stirred the desert dust.