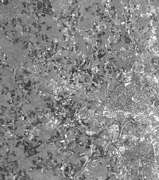 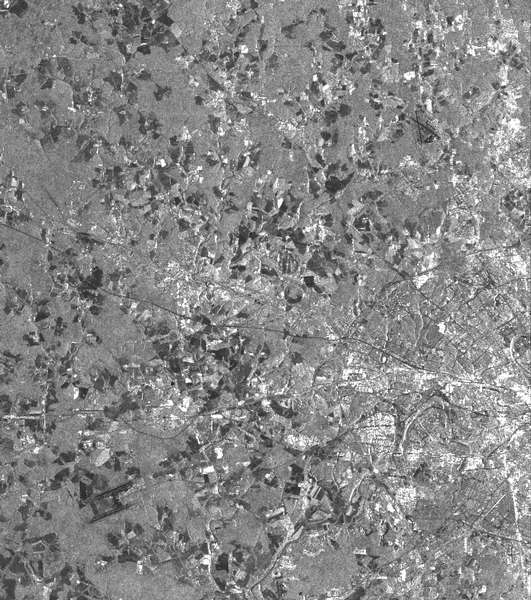 This is a vertically polarized L-band image of the southern half of Moscow, an area which has been inhabited for 2,000 years. The image covers a diameter of approximately 50 kilometers (31 miles) and was taken on September 30, 1994 by the Spaceborne Imaging Radar-C/X-band Synthetic Aperture Radar aboard the space shuttle Endeavour.

The city of Moscow was founded about 750 years ago and today is home to about 8 million residents. The southern half of the circular highway (a road that looks like a ring) can easily be identified as well as the roads and railways radiating out from the center of the city. The city was named after the Moskwa River and replaced Russia's former capital, St. Petersburg, after the Russian Revolution in 1917. The river winding through Moscow shows up in various gray shades. The circular structure of many city roads can easily be identified, although subway connections covering several hundred kilometers are not visible in this image. The white areas within the ring road and outside of it are buildings of the city itself and it suburban towns. Two of many airports are located in the west and southeast of Moscow, near the corners of the image. The Kremlin is located north just outside of the imaged city center. It was actually built in the 16th century, when Ivan III was czar, and is famous for its various churches. In the surrounding area, light gray indicates forests, while the dark patches are agricultural areas. The various shades from middle gray to dark gray indicate different stages of harvesting, ploughing and grassland.

Spaceborne Imaging Radar-C and X-band Synthetic Aperture Radar (SIR-C/X- SAR) is part of NASA's Mission to Planet Earth. The radars illuminate Earth with microwaves, allowing detailed observations at any time, regardless of weather or sunlight conditions. SIR-C/X-SAR uses three microwave wavelengths: L-band (24 cm), C-band (6 cm) and X-band (3 cm). The multi-frequency data will be used by the international scientific community to better understand the global environment and how it is changing. The SIR-C/X-SAR data, complemented by aircraft and ground studies, will give scientists clearer insights into those environmental changes which are caused by nature and those changes which are induced by human activity.