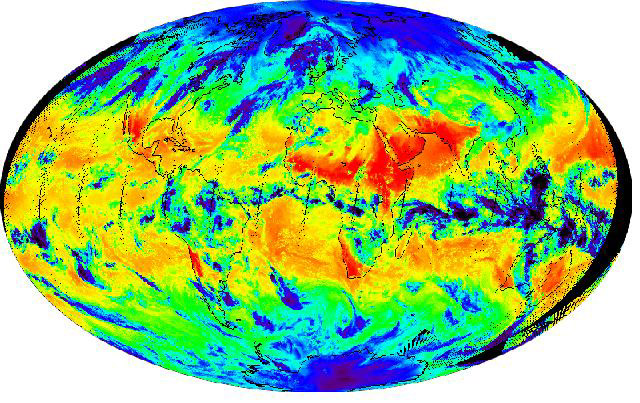 The third image shows the energy being lost from the Earth and the atmosphere by thermal emission. This process, familiar to most of us as the heat radiated by electric stove elements, involves light with wavelengths invisible to the eye. Again, these data are Level 2 data from Saturday, February 26, 2000.

In this image, blue values come from cold scenes with low thermal emission, while red values come from hot ones with high emission. As we might expect, the colder regions near the poles are blue, while the much warmer tropics are red.

Near the center of the image, in red, we can see the Saudi Peninsula standing in contrast with the warm waters of the Indian Ocean, which appear a lighter shade. The land is hotter than the ocean, as we might expect from having the Sun shining on the Earth under clear skies at about 10:45 a.m. local time. Surprisingly, the Sahara Desert appears to have fairly extensive cloud cover, particularaly near the Mediterranean.

Along the Equator from the Amazon Basin in South America, across the Atlantic to the Congo Basin, and then over the Indian Ocean, we can see the tops of very high, thunderstorms in the Intertropical Convergence Zone. These appear in the image as very dark blue or black features that we typically associate with huge cirrus anvils. The temperature of the atmosphere declines with altitude, so that the tops of these tropical thunderstorms are actually colder than the surface of the Earth at the wintertime pole.

The red features in this image are primarily clear areas, where we see through to the Earth’s surface without much impediment from clouds. In addition to the Indian Ocean, we might expect central Mexico and a large area of the Western Pacific to be relatively cloud free.

The prominent green and blue features away from the Equator are typically large storm systems. Over the United States, we can see a frontal system west of the Appalachians that brought a moderate amount of rain to the Ohio Valley and the Northeast. We can also see a massive storm system depositing rain (and snow) on the Northwest Pacific Coast.