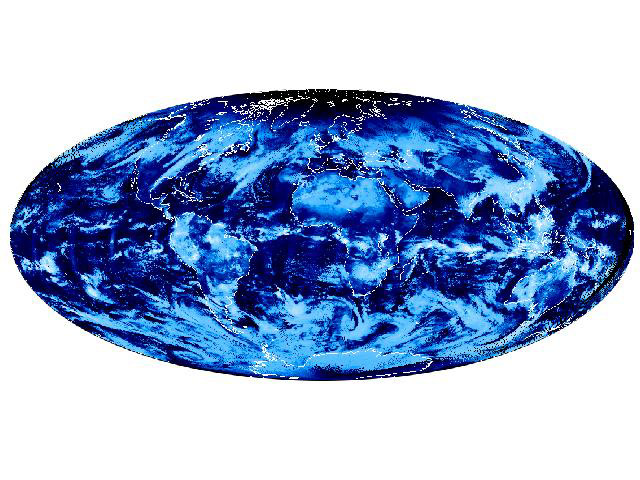 The first image shows reflected solar radiance emerging from the top of the atmosphere, as measured by the CERES Flight Model 1 (FM1) instrument on the Terra spacecraft. These preliminary (unvalidated) data show twenty four hours of measurements covering the entire Earth from North Pole to South Pole.

Reflected solar radiance (or brightness) is a quantity describing how much light energy is moving in a particular direction, in this case the direction between a position on the Earth and the Terra spacecraft. Terra from north to south in the individual orbital swaths that are sometimes visible on close examination of this image. Swath-related features appear most noticeable over the Eastern Pacific, which is just west of South America. There are four features spaced between the left edge of the image and South America that are probably related to the geometry of the scan pattern, where the east side of each swath is being observed at about 11:45 a.m., local solar time, while the west side of each swath is observed at about 9:45 a.m.

Where there are no clouds over the oceans, this image is very dark — as we can easily see in the Carribbean or the Indian Ocean between Saudia Arabia and the Indian subcontinent. Where the ocean part of the images is lighter, there are clouds reflecting sunlight back to the CERES instrument.

The tropical oceans near the Equator show intense thunderstorms. These are particularly visible between Africa and Australia, where the storms form part of the Intertropical Convergence Zone (ITCZ). Air ascends in the ITCZ and descends on the midlatitudes, where makes it harder to form clouds. Further away from the Equator, we can see large storms, such as the cold front west of the Appalachians and the storm over the Northwest Pacific Coast of the United States. The southern oceans show particularly striking patterns associated with huge storm systems circling the Antarctic continent.

Land reflects more sunlight than the oceans do. The Sahara Desert, in the center of this first image, is one of the most reflective large land targets in the world, along with the Saudi Arabian Peninsula. Other land areas of the Earth are darker — with the rain forests of South America and Africa being almost as dark as the oceans. In this image, the rain forests are covered by clouds, so these naturally dark regions do reflect a large amount of sunlight.

While this image is a beautiful reminder of the relationship between clouds and radiation, much work remains to be done in quantifying the uncertainty in the measurements. Other instruments on Terra will also contribute to determining the properties of the clouds, the state of the vegetation on the land, and the mixture of biological and chemical activities in the oceans.