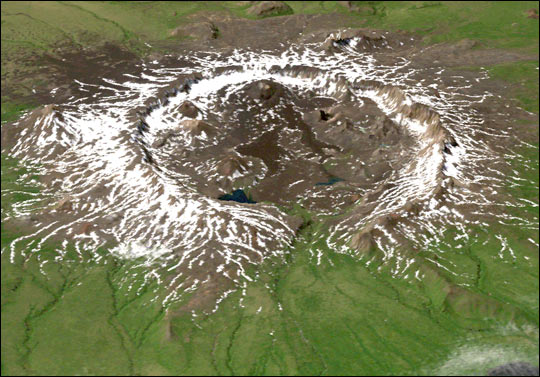 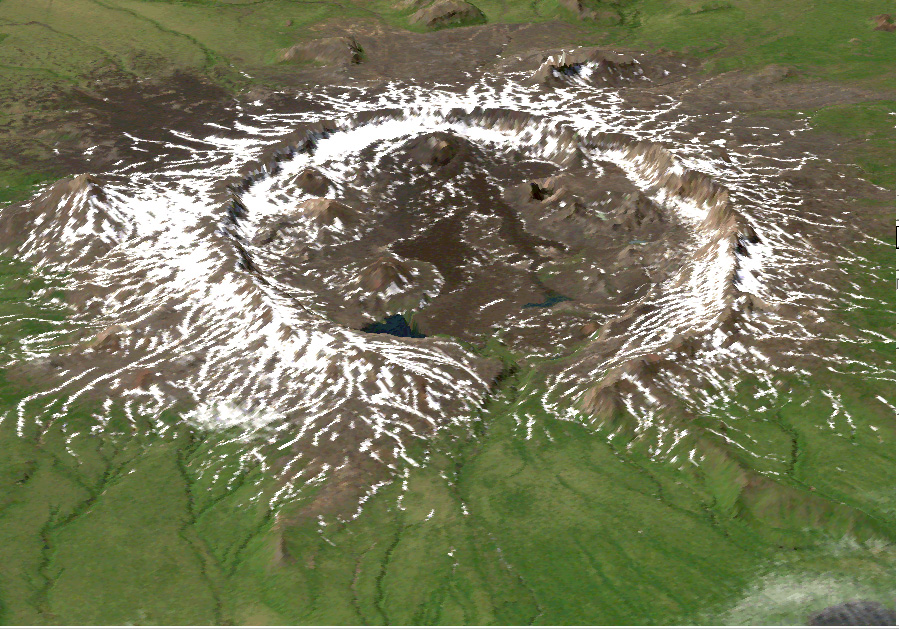 A NASA mission to study Alaska’s unique terrain is providing scientists with their first detailed look at the changing topography of one of Earth’s most active volcanic regions.

Researchers at the Alaska Synthetic Aperture Radar (SAR) Facility, Fairbanks, have created a high-resolution digital elevation model of Umnak Island, home to the Okmok Volcano. This model can be used to produce new, accurate geologic maps. The most recent topographic map of the region was made in 1957 from aerial photographs. Okmok has erupted four times since then, dramatically changing the landscape.

After initial processing at JPL, the AirSAR data were sent to the Alaska Synthetic Aperture Radar Facility at the Geophysical Institute at the University of Alaska Fairbanks. Researchers there combined numerous AirSAR strips of data into a mosaic, fused the mosaic to Landsat imagery, checked its accuracy and generated a number of data products, including the mosaic of Umnak Island.

“Alaska needs new, accurate maps, but it continues to fall behind,” said Rick Guritz, of the Alaska Synthetic Aperture Radar Facility’s Science Center. “These data provide a fresh, accurate view of a volatile environment and have been used this summer by geologists on the volcano. Our goal is to compare various NASA geospatial technologies for their ability to satisfy Alaska’s needs. We are doing this in partnership with agencies of the Alaska Department of Natural Resources.”

“The recent Airsar data have the potential to provide us with sufficient topographic detail of the surface of Umnak Island to produce an accurate, up-to-date geologic map of the volcano and aid in the analysis of surface deformation that indicates magma movement,” said Janet Schaefer, geologist of the Alaska Volcano Observatory. “The detailed images provided by the Alaska SAR Facility were very useful for distinguishing geologic features such as lava flow contacts, debris avalanche deposits, mudflow and lahar extents, stream drainage patterns, and coastal features.”

Field work on Umnak was completed this past summer, and a new revised geologic map of the island combining field and airborne measurements will be created.

More images associated with this release are available at: http://www.jpl.nasa.gov/images/earth/volcano More information on Airsar is available at http://airsar.jpl.nasa.gov. The Alaska Synthetic Aperture Radar Facility’s website is http://www.asf.alaska.edu.