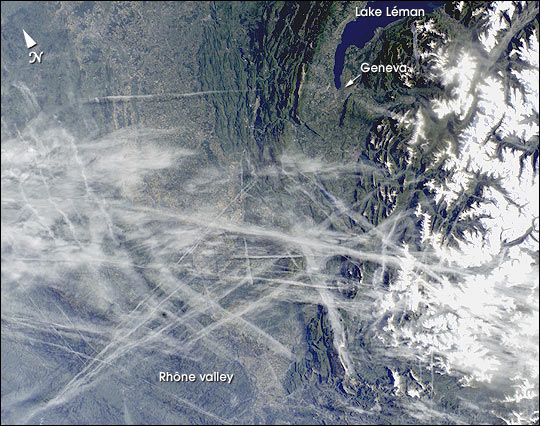 This digital photograph taken through the windows of the International Space Station on May 15, 2002, shows condensation trails over the Rhône Valley in the region west of Lyon. Condensation trails—or contrails—are straight lines of ice crystals that form in the wake of jet liners where air temperatures at altitude are lower than about ?40°C.

Newer contrails are thin whereas older trails have widened with time as a result of light winds. Because of this tendency for thin contrails to cover greater areas with time, it is estimated that these “artificial clouds” cover 0.1% of the planet’s surface. Percentages are far higher in some places such as southern California, the Ohio River Valley and parts of Europe, as illustrated here.

The climatic impact of such clouds is poorly understood. In an unprecedented experiment following the September 11 grounding of all aircraft in the United States, researchers reported in the August 8 issue of Nature that temperatures in areas usually affected by contrail blankets fluctuated higher and lower during the contrail-free period. Despite this dramatic conclusion, it is nevertheless too early to know whether contrails produce a net warming or cooling of the atmosphere. Whereas cirrus clouds seem to have a net warming effect, contrails are denser and thus may produce the opposite effect.