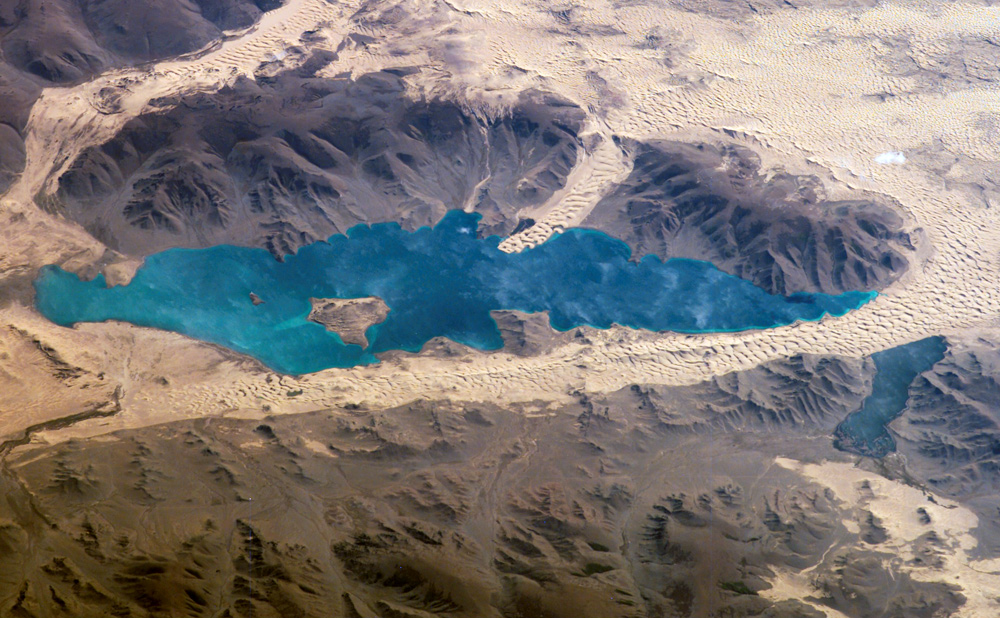 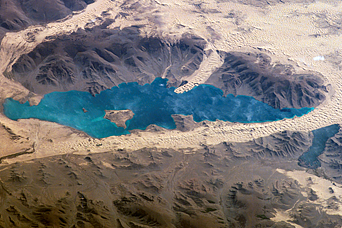 Har Nuur (“Black Lake”) is located in western Mongolia’s Valley of Lakes, part of a system of closed basins stretching across central Asia. These basins are the remnants of larger paleolakes (paleo- means “ancient”) that began to shrink approximately five thousand years ago as regional climate became drier. This oblique (looking at an angle) astronaut photograph captures the dynamic nature of the landscape of Har Nuur. The lake is encircled by sand dune fields that encroach on the lower slopes of the Tobhata Mountains to the west and south. Gaps in the mountains have been exploited by sand dunes moving eastward, indicating westerly winds. The most striking example is a series of dunes entering Har Nuur along its southwestern shoreline.

Astronaut photograph ISS013-E-78506 was acquired September 7, 2006, with a Kodak 760C digital camera using a 400 mm lens, and is provided by the ISS Crew Earth Observations experiment and the Image Science & Analysis Group, Johnson Space Center. The International Space Station Program supports the laboratory to help astronauts take pictures of Earth that will be of the greatest value to scientists and the public, and to make those images freely available on the Internet. Additional images taken by astronauts and cosmonauts can be viewed at the NASA/JSC Gateway to Astronaut Photography of Earth.