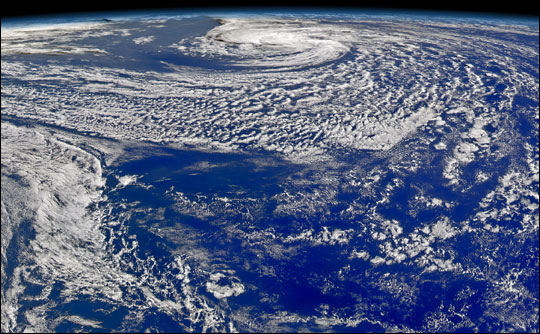 As if to mark the end of a spectacular hurricane season, Tropical Storm Otto developed over a remote section of the Atlantic Ocean in the final hours of the season on November 30, 2004. The storm was about 1400 kilometers east of Bermuda on December 1, when the Sea-viewing Wide Field-of-view (SeaWiFS) Sensor flying on the OrbView-2 satellite captured this image. Otto, the swirl of clouds along the top edge of the image, has winds of 65 kilometers per hour (40 mph) with stronger gusts, and is moving southeast. The storm is not expected to threaten land. The National Hurricane Center predicts that the storm will degrade into a tropical depression overnight.