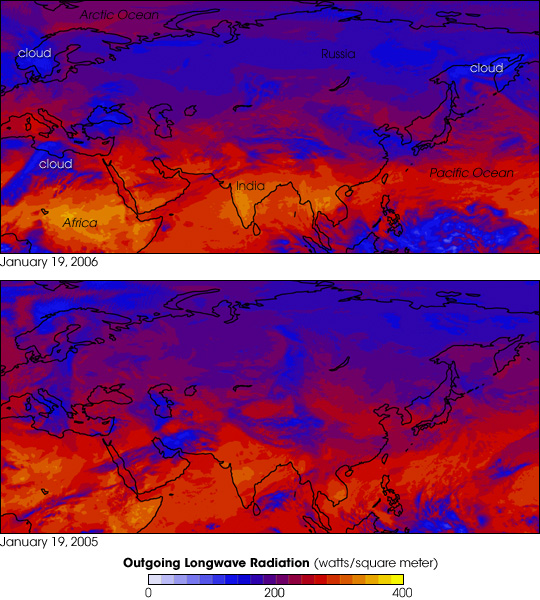 Extreme cold gripped Russia and much of Eastern Europe throughout January 2006. The cold is apparent in these images, which show the heat being emitted to space from the Earth’s surface and atmosphere. Areas that were colder are blue and dark purple, while patches of warmth are yellow. The Clouds and the Earth’s Radiant Energy System (CERES) sensor flying onboard the Aqua satellite took these images on January 19, 2006 (top), and January 19, 2005 (bottom). Although both images show wintertime cold, the range of intense cold is substantially larger in the image taken in 2006.

January 19 was a day of bitter cold for Russia. According to the BBC News, more than 20 people in Russia died from extreme cold in January 2006. Between January 18 and 19, overnight temperatures dropped to minus 30°C (minus 22°F). Energy consumption in Russia soared to 146,000 megawatts, the highest level since the collapse of the Soviet Union. Meanwhile, gas supplies from Russia to other European countries dropped.

Images such as these usually show stark differences between the heat being emitted from clouds in the atmosphere and heat being emitted from the land. Clouds are much colder and tend to stand out against the warmer land as they do in the lower half of both images. The clouds are bright blue against the underlying red and yellow of the land. In 2006, the land is so cold that it is difficult to differentiate between land and clouds over Russia. It is likely that the bright blue areas are cloud, while the darker blue and purple areas are land.