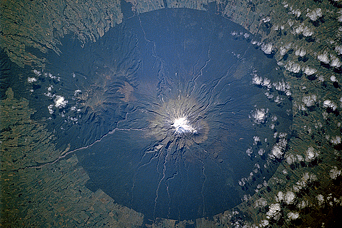 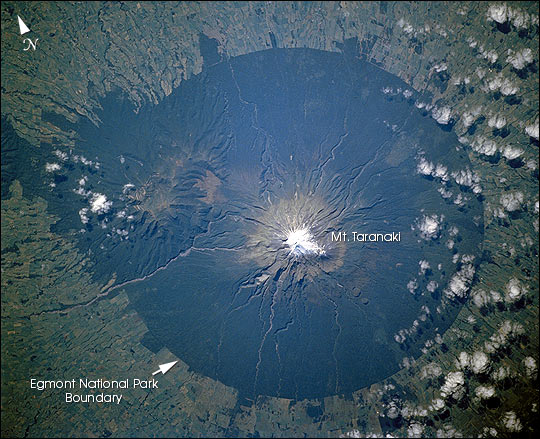 The lush forests of Egmont National Park, on New Zealand‘s North Island, contrast with the pasturelands outside the circular park boundaries. The unique shape of the park results from its first protection in 1881, which specified that a forest reserve would extend in a 9.6-kilometer radius from the summit of Mt. Taranaki (named Mt. Egmont by Captain Cook). The park covers about 33,500 hectares and Mt. Egmont stands 2518 meters tall. The volcano began forming 70,000 years ago, and last erupted in 1755. A series of montane habitats occur in procession up the flanks of the volcano—from rainforest, to shrubs, to alpine, and finally snow cover.

Image STS110-726-6, was taken by Space Shuttle crewmembers on April 9, 2002 using a Hasselblad film camera. Image provided by the Earth Sciences and Image Analysis Laboratory at Johnson Space Center. Additional images taken by astronauts and cosmonauts can be viewed at the NASA-JSC Gateway to Astronaut Photography of Earth.