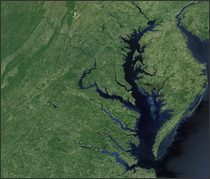 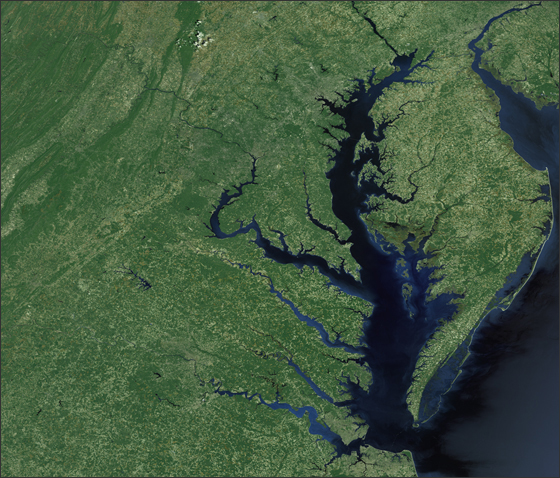 In the intervening years since Smith’s exploration, farmlands, cities, and suburbs have largely replaced the dense forests surrounding the Bay, the waters of the Chesapeake have become brownish-green with overabundant algae, and the once bountiful fish, crabs, and oysters have fallen victim to over-harvesting, habitat destruction, and disease. While still a commercially important ecosystemâ€”home to some 3700 speciesâ€”four centuries of regional population growth have crippled the Bay’s productivity and earned it a place on the U.S. Environmental Protection Agency’s â€œdirty watersâ€ list.

Information collected from 438-miles above Earth by the Landsat satellites, has brought Bay scientists one step closer to better controlling pollution levels throughout the watershed. This is because Landsat affords a bird’s-eye view of the watershed at a scale appropriate for deciphering human land use and land cover patterns.

â€œLand cover data is critical for decision-making at the Chesapeake Bay Program,â€ CBP GIS team leader, John Wolf says. To take on the Herculean task of water quality improvement over such a vast area, Bay managers use models to mathematically synthesize large amounts of information and predict the most effective methods for lessening watershed pollution. The nature of the watershed’s landscapeâ€“â€“the amount of paved or impervious surfaces, the proportions of cropland and rangeland, forested regions, marshland and the likeâ€“â€“is a key input for these predictive models8. Accordingly, Landsat-derived land cover data are fed into the Chesapeake Bay Program’s Watershed Model in order to predict where nutrient loads can be expected and where managers should take action.