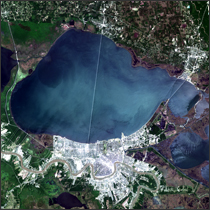 In late August 2005, Hurricane Katrina left much of New Orleans inundated with flood water. New Orleans sits between Lake Pontchartrain and the Mississippi River. The city appears a pinkish shade in the April 2000 image. In the post-Katrina image acquired on Aug. 30, 2005, the flooded portions of the city appear a dark blue color. The images featured here use the ETM+ bands 7, 4, and 2.