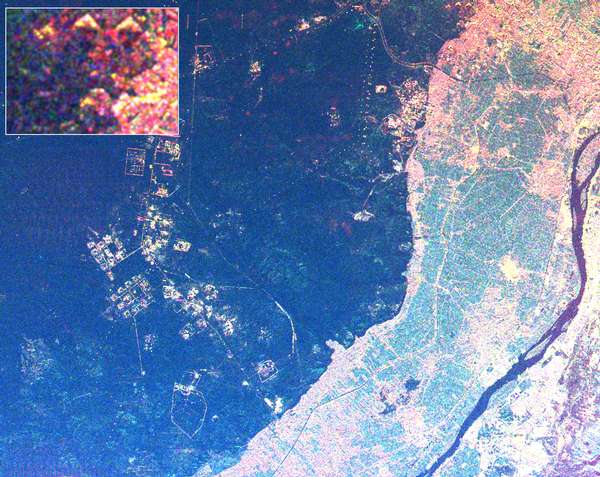 This radar image shows the area west of the Nile River near Cairo, Egypt. The Nile River is the dark band along the right side of the image and it flows approximately due North from the bottom to the right. The boundary between dense urbanization and the desert can be clearly seen between the bright and dark areas in the center of the image. This boundary represents the approximate extent of yearly Nile flooding which played an important part in determining where people lived in ancient Egypt. This land usage pattern persists to this day.

The pyramids at Giza appear as three bright triangles aligned with the image top just at the boundary of the urbanized area. They are also shown enlarged in the inset box in the top left of the image. The Great Pyramid of Khufu (Cheops in Greek) is the northern most of the three Giza pyramids. The side-looking radar illuminates the scene from the top, the two sides of the pyramids facing the radar reflect most of the energy back to the antenna and appear radar bright; the two sides away from the radar reflect less energy back and appear dark Two additional pyramids can be seen left of center in the lower portion of the image. The modern development in the desert on the left side of the image is the Sixth of October City, an area of factories and residences started by Anwar Sadat to relieve urban crowding.