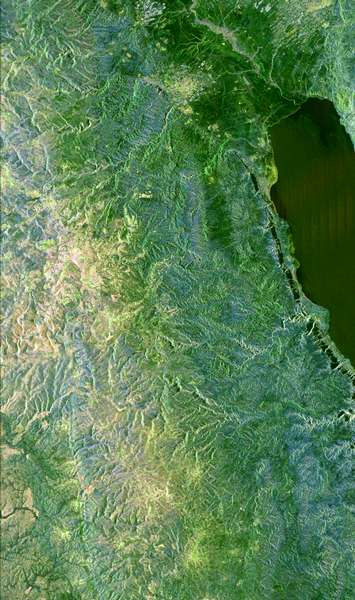 Space Radar Image of Jerusalem and the Dead Sea

This space radar image shows the area surrounding the Dead Sea along the West Bank between Israel and Jordan. This region is of major cultural and historical importance to millions of Muslims, Jews and Christians who consider it the Holy Land. The yellow area at the top of the image is the city of Jericho. A portion of the Dead Sea is shown as the large black area at the top right side of the image. The Jordan River is the white line at the top of the image which flows into the Dead Sea. Jerusalem, which lies in the Judaean Hill Country, is the bright, yellowish area shown along the left center of the image. Just below and to the right of Jerusalem is the town of Bethlehem. The city of Hebron is the white, yellowish area near the bottom of the image. The area around Jerusalem has a history of more than 2,000 years of settlement and scientists are hoping to use these data to unveil more about this region's past. The Jordan River Valley is part of an active fault and rift system that extends from southern Turkey and connects with the east African rift zone. This fault system has produced major earthquakes throughout history and some scientists theorize that an earthquake may have caused the fall of Jericho's walls. The Dead Sea basin is formed by active earthquake faulting and contains the lowest place on the Earth's surface at about 400 meters (1,300 feet) below sea level. It was in caves along the northern shore of the Dead Sea that the Dead Sea Scrolls were found in 1947.

The image was acquired by the Spaceborne Imaging Radar-C/X-band Synthetic Aperture Radar (SIR-C/X-SAR) on October 3, 1994 onboard the space shuttle Endeavour. SIR-C/X-SAR, a joint mission of the German, Italian and United States space agencies, is part of NASA's Mission to Planet Earth. Each flight of SIR-C/X-SAR collected data at more than 400 sites around the globe. The science team is using images like this one to help answer various scientific questions about the condition of ecosystems, the extent of snow and ice packs, geologic activity such as volcanoes and earthquakes, and measurement of ocean waves and currents.