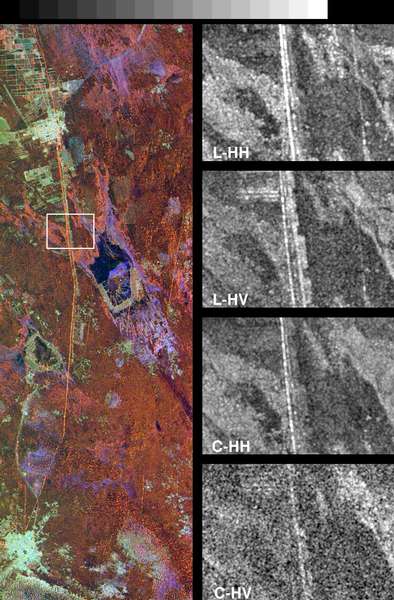 These spaceborne radar images show a segment of the Great Wall of China in a desert region of north-central China, about 700 kilometers (434 miles) west of Beijing. The wall appears as a thin orange band, running from the top to the bottom of the color image on the left. The black and white images on the right correspond to the area outlined by the box and represent the four radar channels of the Spaceborne Imaging Radar-C (SIR-C). Each channel is sensitive to different aspects of the terrain, including two generations of the Great Wall. The L-band image (24 cm wavelength, horizontally transmitted and horizontally received polarizations) provides the clearest image of the two wall segments. The bright continuous line running from top to bottom in this image is the younger wall, built during the Ming Dynasty about 600 years ago. Immediately to the right of this wall is a bright discontinuous line that is the remnant of an older version of the wall, built during the Sui Dynasty, about 1500 years ago. The two generations of the wall are seen less distinctly in the L-band image (horizontally transmitted, vertically received) and C-band image (6 cm wavelength, horizontally transmitted, horizontally received). Orchards and other trees lining a road parallel to the wall show up as bright rectangles on the these two images because the L and C channels are sensitive to complex vegetation structure. The Ming Dynasty wall is between 5 meters and 8 meters high (16 feet to 26 feet) in these areas. The entire wall is about 3,000 kilometers (1,864 miles) long, but only a 75-kilometer (45.5-mile) long segment is shown in this image. The wall is easily detected from space by radar because its steep, smooth sides provide a prominent surface for reflection of the radar beam. Detection of the remnant Sui Dynasty wall by radar is allowing Chinese researchers to trace the former location of the wall across vast and remote areas. In some areas, the Sui wall is buried by sand that has been blown across the desert.