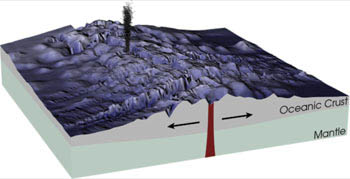 New crust is formed along the mid-ocean ridges. Plumes of upwelling magma push the plates apart along these ridges at a rate of 1 - 5 cm per year. Underwater volcanoes--black smokers--are a common feature of the ridges.