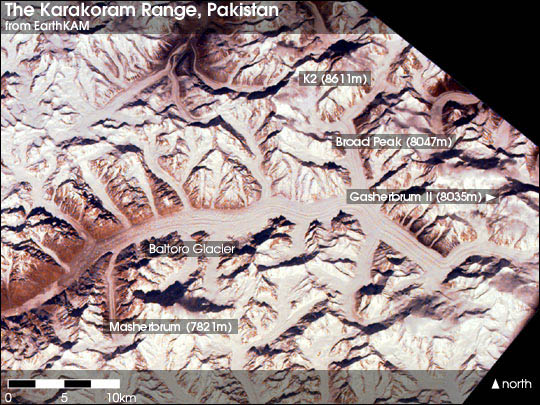 The Baltoro Glacier in northeast Pakistan runs through the center of the second tallest mountain range on Earth—the Karakoram. At 8,611 m (28,251 ft) K2 is the tallest mountain in the region, and three others within 20 km top 8,000 m.

The Karakoram and the Himalaya are important to Earth scientists for several reasons. They are one of the world's most geologically active areas, at the boundary between two colliding continents. Therefore, they are important in the study of plate tectonics. Mountain glaciers may serve as an indicator of climate change, advancing and receding with long-term changes in temperature and precipitation. These extensive ranges may have even caused climate change when they were formed over 40 million years ago. The large amounts of rock exposed to the atmosphere are weathered (broken down) by carbon dioxide. This process removes the greenhouse gas from the atmosphere, and could have caused the global climate to cool, triggering an ongoing series of ice ages.

This image, from February 14, 2000, was aquired by EarthKAM, a NASA sponsored program that provides stunning, high-quality photographs of our planet taken from the Space Shuttle and from the International Space Station. Since 1996, EarthKAM students have taken thousands of photographs of the Earth by using the World Wide Web to direct a digital camera flown on the Space Shuttle.