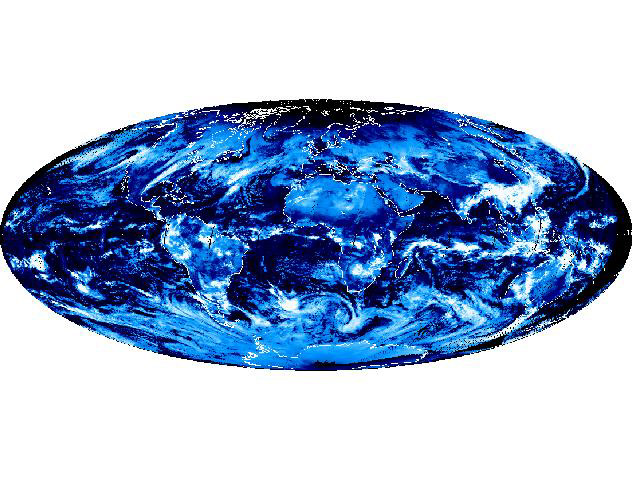 The second image shows the reflected solar flux emerging from the top of the atmosphere. The data are taken from an entire day of observations from the CERES Flight Model 1 (FM1) instrument on the Terra spacecraft. The quantity plotted is "reflected solar flux", which not only involves instrument calibration and geolocation, but also removes the angular dependence of the upwelling radiance field. Thus, these data are Level 2 data, which means that CERES has been able to get a reasonable "engineering" calculation of derived physical fields within a few days of opening its covers. The data shown come from Saturday, February 26, 2000, the first full day of FM1 scanning.

The latitude where the Sun is overhead is slightly below eight degrees south on this day. The upper portion of the globe, from about 80 degrees north to the North Pole, receives no sunlight on this day and reflects none. The CERES instrument sees an entire swath of the Earth from limb-to-limb as the satellite passes from North to South. The short black arcs that are regularly spaced near the Equator mark the edges of the scan swaths. Although the CERES instrument actually covers the Earth from one swath to the next, the image was made without taking the expansion of the instrument field-of-view into account.

Just to the left of the center of the image, we can see South America. The North American continent is off to the northwest, where it is obscured by a cold front east of the Appalachians and a storm striking the Northwest Pacific Coast. Africa, particularly the Sahara Desert, and Saudi Arabia are clearly visible to the right of center in this image. The Sahara is obscured to some extent because of clouds. Saudi Arabia is not obscured, so we can see the bright sands of the desert contrast with the dark ocean at the southern edge of the Arabian Peninsula.

Most of the patterns visible away from the Equator are large storm systems, where clouds reflect a large fraction of the incident sunlight. To the right of center, we can see much of the Indian subcontinent, although a large and very bright storm over the Himalayas extends to obscure the Pacific coast of China. Between India and Australia (visible just below the Equator on the lower right of the image), we can see a series of large thunderstorms that form the clouds in the Intertropical Convergence Zone (ITCZ). Far to the south, we can also see the high reflectivity of the Antarctic snow and ice emerge from the mixture of cloudy and clear areas over the Southern Atlantic and Pacific.