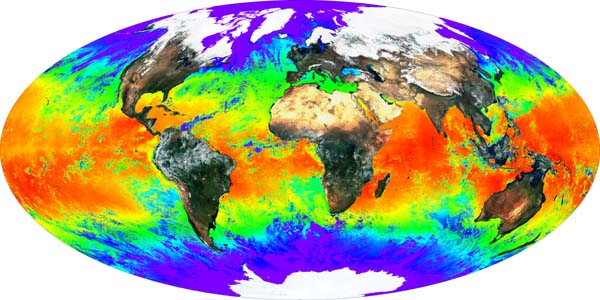 This global image is a combination of the MODIS Land Surface Reflectance product and Sea Surface Temperature product. MODIS bands at 645nm, 555nm, and 469nm (displayed as red, green, and blue) were used to make this quasi-true-color image of the land surface. The operational atmospheric correction produces images of land that are similar to what would be observed if there were no atmosphere. MODIS calibrated multi-spectral observations are essential to monitor the vegetation and study the Earth's biogeochemical cycles. Over the ocean the surface temperature is computed using MODIS bands at 3.9µm and 4.0µm. Temperature is cooler to warmer from purple to red. This is the first view of the oceans obtained using the highly transmissive window channels not available on heritage instruments. These new bands are much less affected by the presence of atmospheric water vapor and thus present a better picture of the Sea Surface Temperature in the moist tropics. Note that the Sea Surface Temperature is not computed over the shallow ocean. This global image is a composite of approximately 20 days of data over land and one week over ocean (data acquired between mid-March and early April).
(MODIS Data Type: MODIS-PFM)