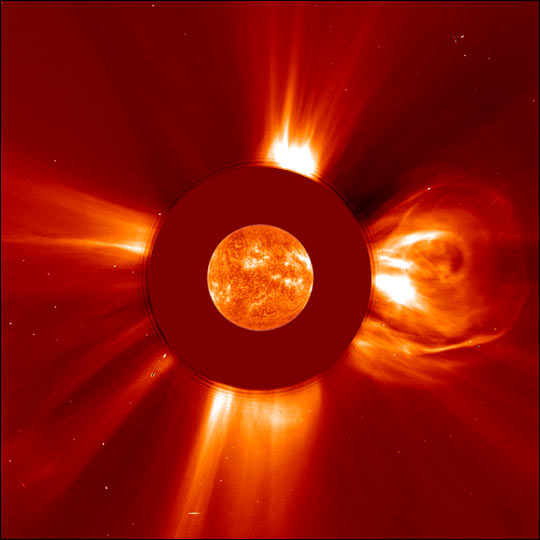 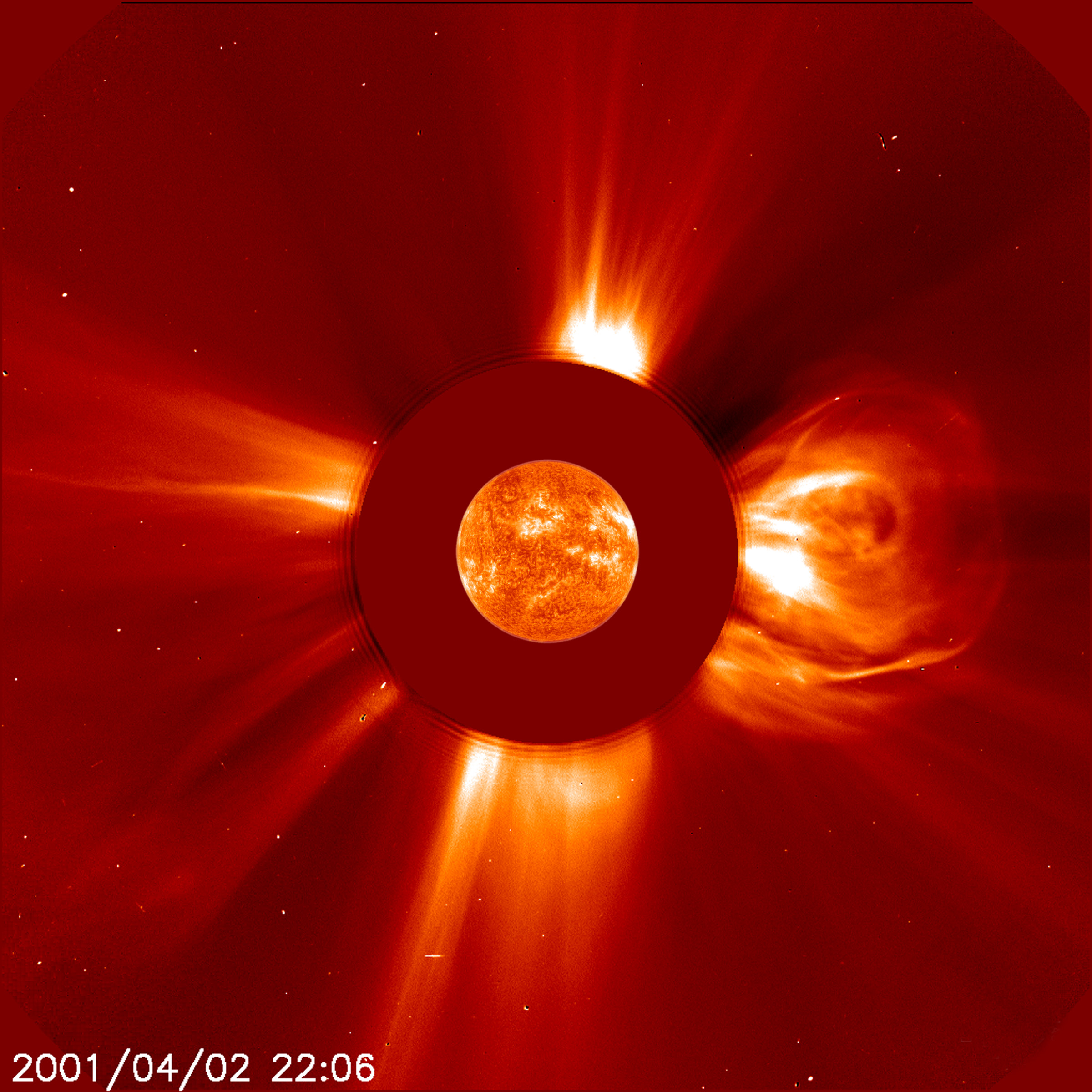 View an animation from the Extreme ultraviolet Imaging Telescope (EIT).

At 4:51 p.m. EDT, on Monday, April 2, 2001, the sun unleashed the biggest solar flare ever recorded, as observed by the Solar and Heliospheric Observatory (SOHO) satellite. The flare was definitely more powerful than the famous solar flare on March 6, 1989, which was related to the disruption of power grids in Canada. This recent explosion from the active region near the sun's northwest limb hurled a coronal mass ejection into space at a whopping speed of roughly 7.2 million kilometers per hour. Luckily, the flare was not aimed directly towards Earth.

Solar flares, among the solar system's mightiest eruptions, are tremendous explosions in the atmosphere of the Sun capable of releasing as much energy as a billion megatons of TNT. Caused by the sudden release of magnetic energy, in just a few seconds flares can accelerate solar particles to very high velocities, almost to the speed of light, and heat solar material to tens of millions of degrees.

Solar ejections are often associated with flares and sometimes occur shortly after the flare explosion. Coronal mass ejections are clouds of electrified, magnetic gas weighing billions of tons ejected from the Sun and hurled into space with speeds ranging from 12 to 1,250 miles per second. Depending on the orientation of the magnetic fields carried by the ejection cloud, Earth-directed coronal mass ejections cause magnetic storms by interacting with the Earth's magnetic field, distorting its shape, and accelerating electrically charged particles (electrons and atomic nuclei) trapped within.

Severe solar weather is often heralded by dramatic auroral displays, northern and southern lights, and magnetic storms that occasionally affect satellites, radio communications and power systems. The flare and solar ejection has also generated a storm of high-velocity particles, and the number of particles with ten million electron-volts of energy in the space near Earth is now 10,000 times greater than normal. The increase of particles at this energy level still poses no appreciable hazard to air travelers, astronauts or satellites, and the NOAA SEC rates this radiation storm as a moderate S2 to S3, on a scale that goes to S5.

Monday's solar flare produced an R4 radio blackout on the sunlit side of the Earth. An R4 blackout, rated by the NOAA SEC, is second to the most severe R5 classification. The classification measures the disruption in radio communications. X-ray and ultraviolet light from the flare changed the structure of the Earth's electrically charged upper atmosphere (ionosphere). This affected radio communication frequencies that either pass through the ionosphere to satellites or are reflected by it to traverse the globe.

The SOHO mission is being conducted collaboratively between the European Space Agency and NASA.