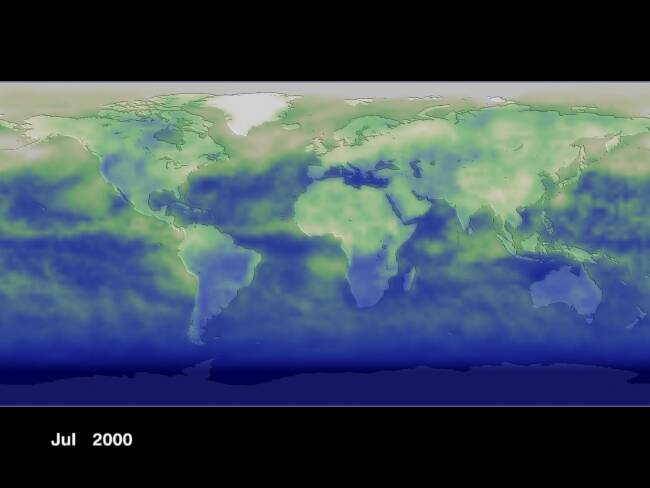 The amount of incoming solar energy the Earth receives on June 21, the first day of summer, is 30 percent higher at the North Pole than at the equator. Just 6 months later in winter, the entire polar cap receives no energy since Earth's movement along its orbit has pointed the North Pole away from the Sun. This swing of illumination and reflection is shown dramatically in the CERES images. Critical to understanding future climate are the subtle changes in reflected solar energy, such as changes in the surface area of the arctic ice cap or in cloud thickness. Ever-changing cloud cover or the seasonal retreat and advance of sea ice cause motion in this image. The CERES data shown in these images are 14-day running average values of sunlight reflected back to space.

What do the colors mean? The lowest amount of sunlight reflected back to space, shown in blue, occurs over clear ocean areas. Green colors show gradually increasing amounts of reflected sunlight. The areas of greatest reflected solar energy, shown in white, occur both from the tops of thick clouds and from ice-covered regions on the Earth's surface during summer.