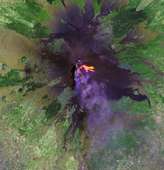 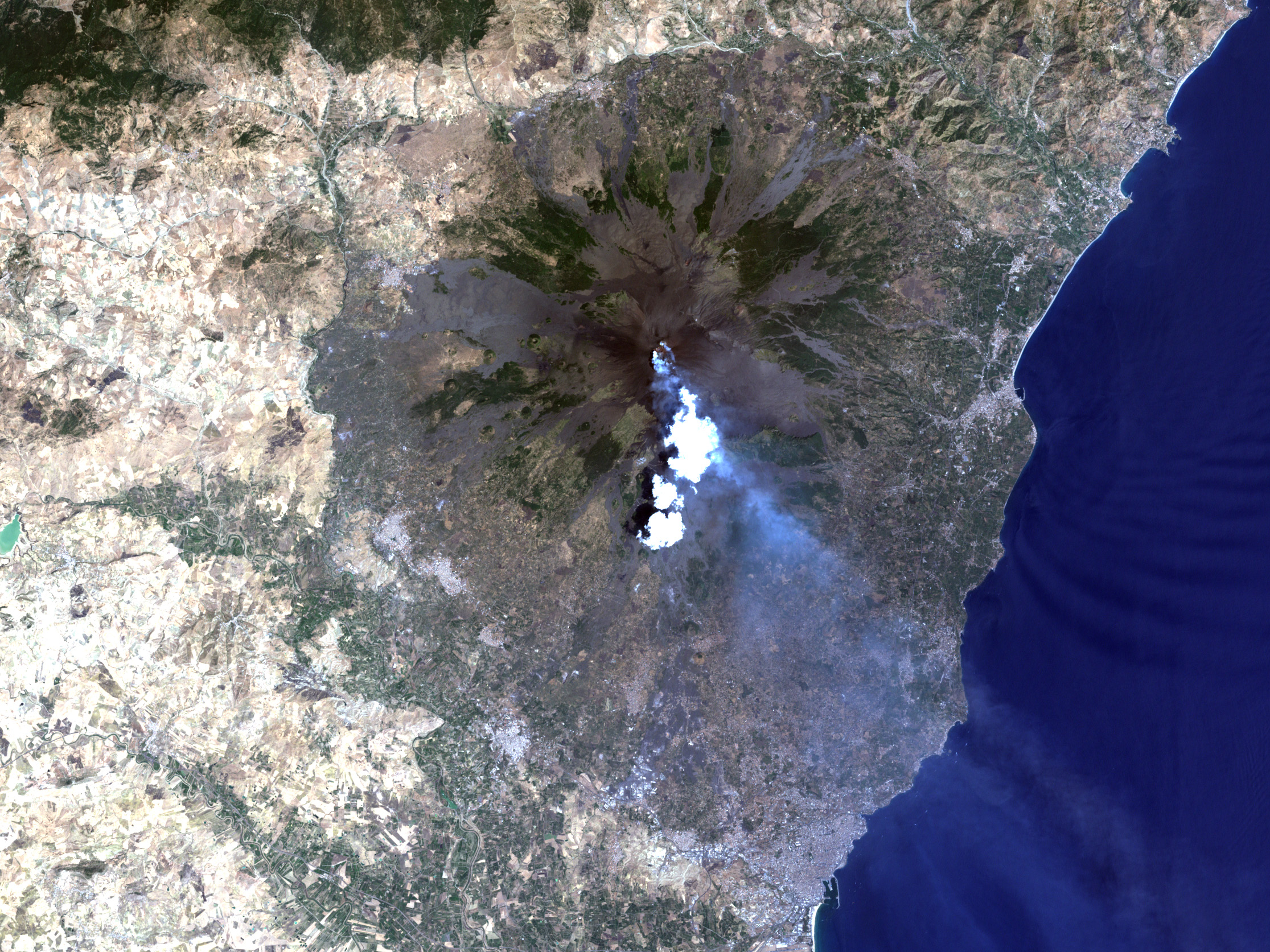 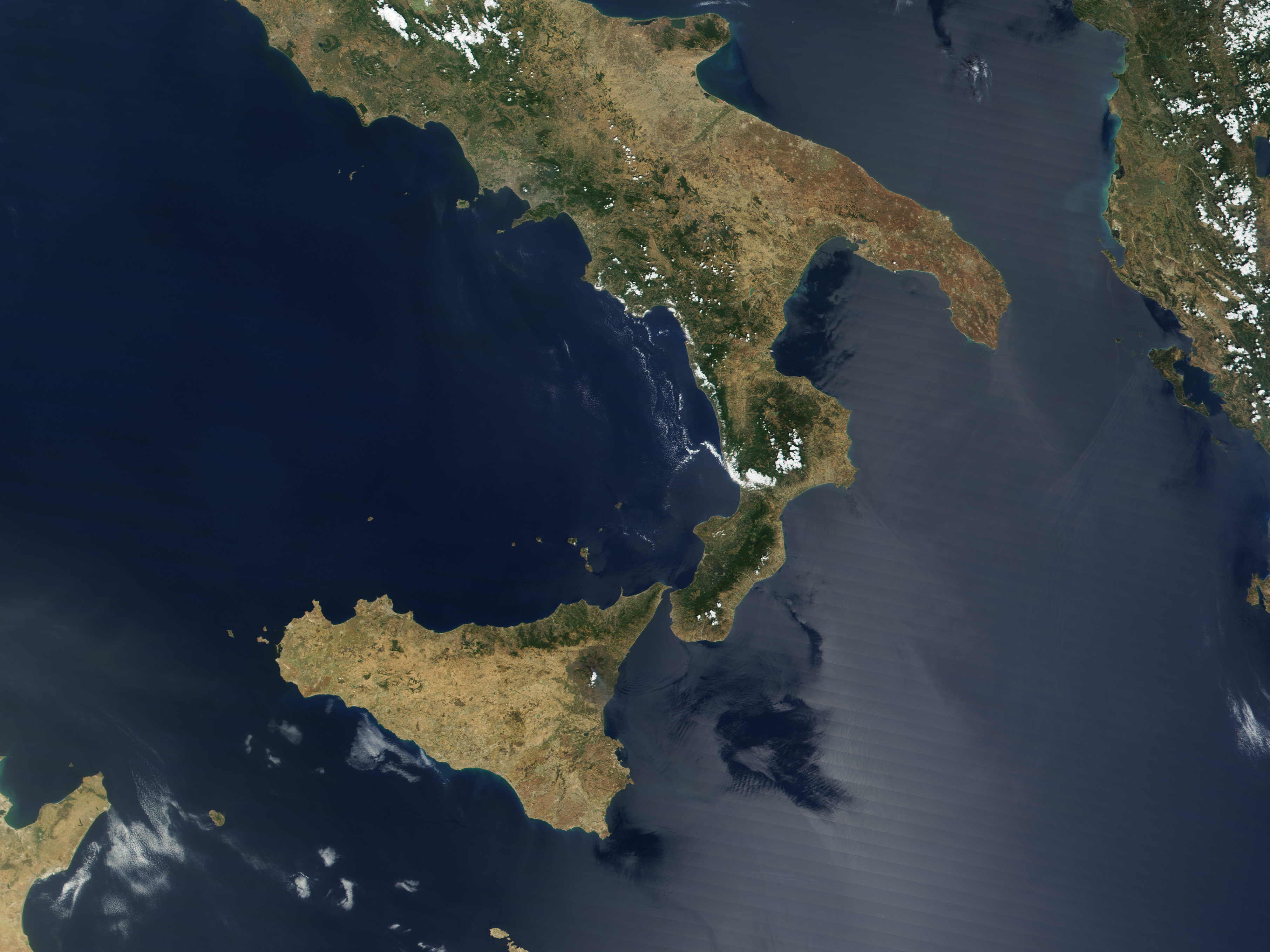 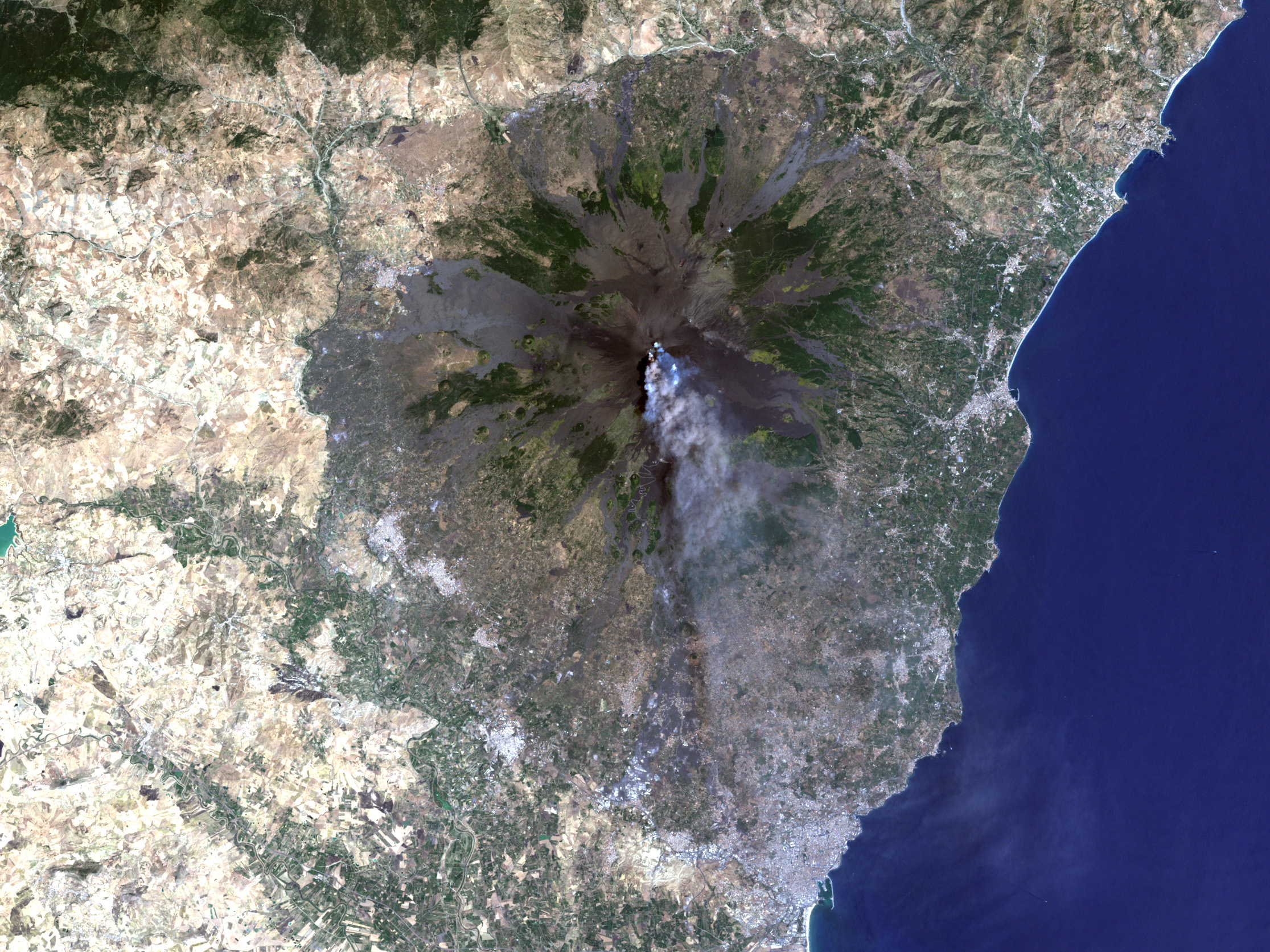 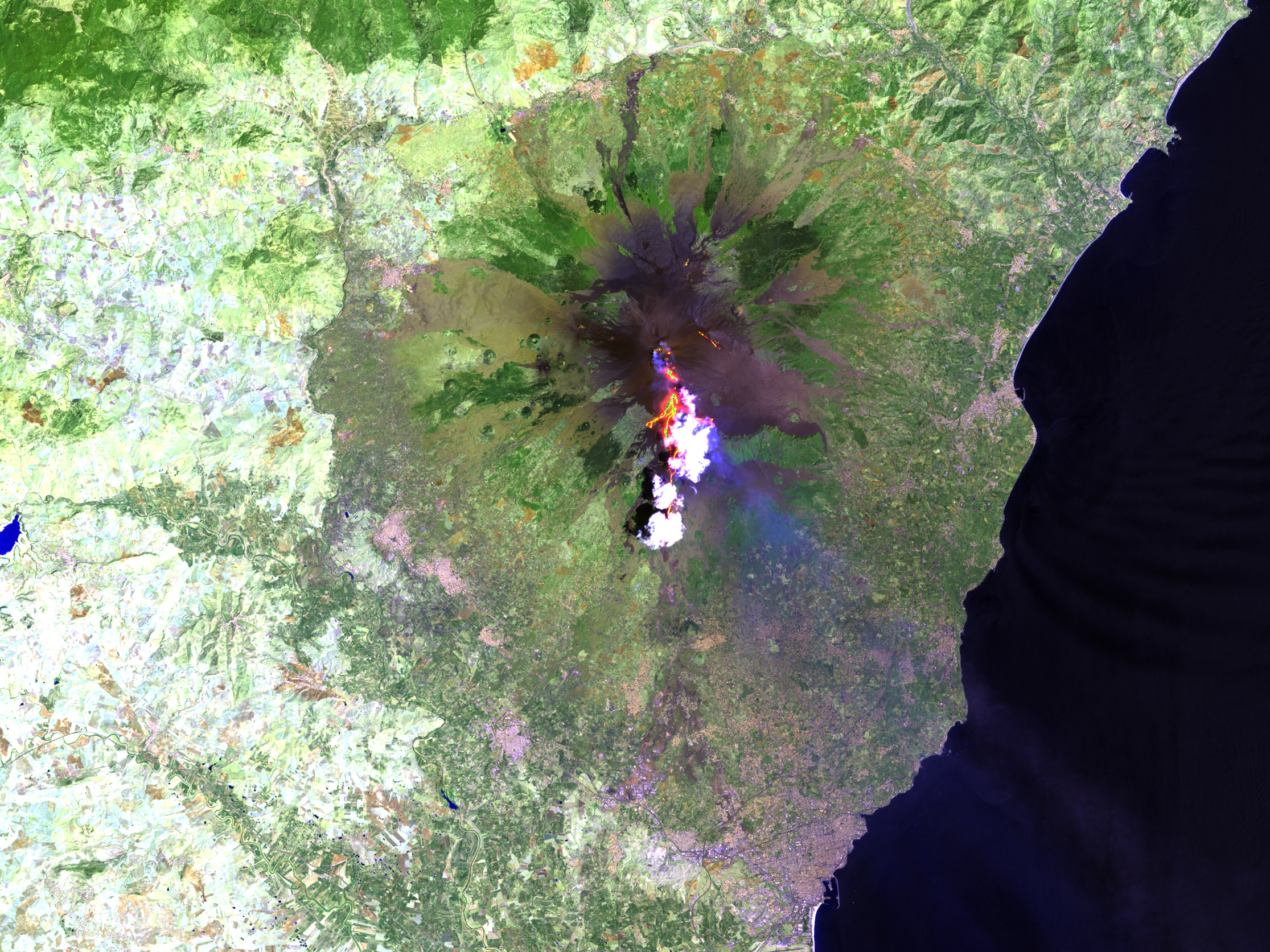 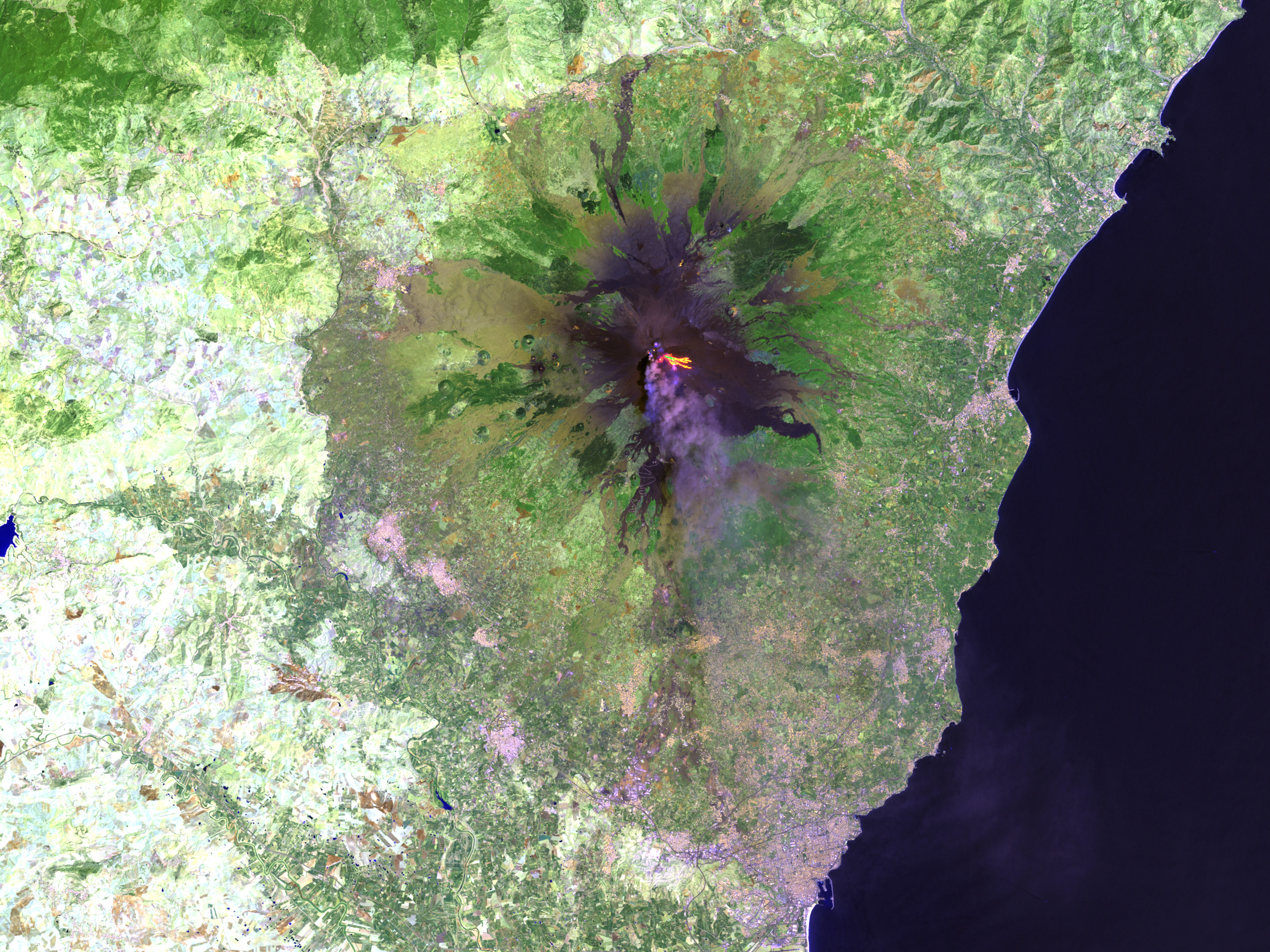 On July 29, 2001, emergency workers in Sicily, Italy, were working round the clock to reinforce dams to contain the lava flows threatening the tourist base, called Rifugio Sapienza, at the foot of Mt. Etna. Another river of lava stopped just short (about 4 km) of the town of Nicolosi. Meanwhile, the air over southeastern Sicily is thick with ash and nearby residents of Catania, a town located downwind of the volcanic plume, have been forced to use umbrellas while walking outside. As of August 2, after two days of relative calm, most emergency crews are cutting back their presence in the area according to news reports. In the meantime, the local airport has been closed and a state of emergency remains in effect.

These Landsat 7 and Terra images show the area around the volcano on July 13, the first day of the current eruption event, and July 29, marking what experts hope is near the end of Etna's activities. The two Landsat 7 scenes were both produced in true and false color, each revealing different features of Etna's activities. The first image shows Etna on July 13 in both true and false color. The true color image shows the vegetation (green pixels) in the landscape around the volcano and the bare rock surface left by old lava flows (brown pixels), all underlying the plume of smoke and ash (blue-grey pixels) streaming from Etna's caldera. A bright white cloud hovers above the volcano in the July 29 scene. The false-color images reveal the rivers of lava flowing down the flanks of the volcano (the bright orange ribbons radiating away from the volcano's caldera).

The animated zoom into the region was produced using a combination of data from the Moderate-resolution Imaging Spectroradiometer (MODIS), flying aboard NASA's Terra satellite, and the Enhanced Thematic Mapper Plus (ETM+), flying aboard Landsat 7. The two satellites fly in formation so that the MODIS image was acquired about 20 minutes after the ETM+ image was acquired. The higher resolution ETM+ image (15 meters per pixel) was then nested in the larger MODIS image (250 meters per pixel) to create the zoom effect in this animation.

The Landsat 7 spacecraft is a joint mission of NASA and the United States Geological Survey (USGS). Terra is the flagship in NASA's Earth Observing System (EOS) Project. Both missions are part of NASA's Earth Science Enterprise program, a long-term research effort to monitor, study, and map the Earth.