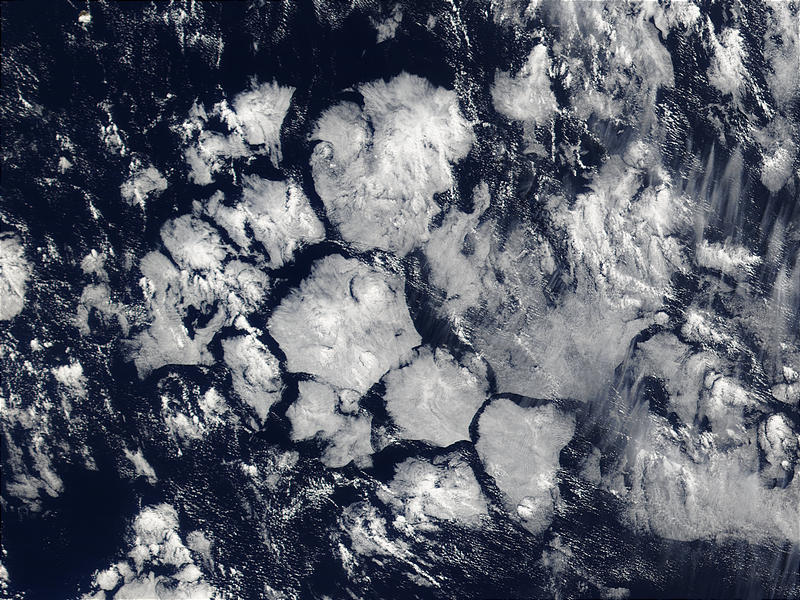 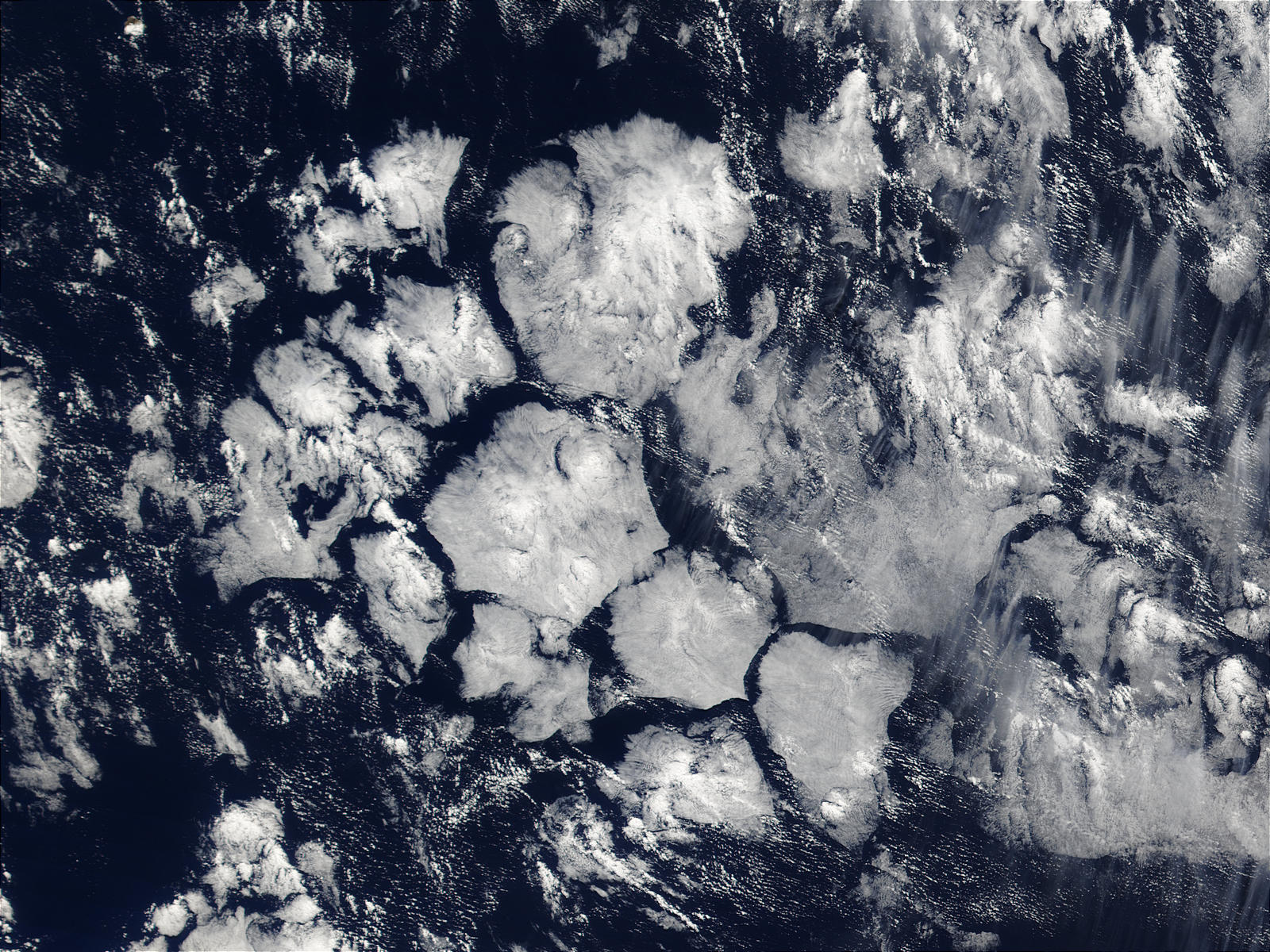 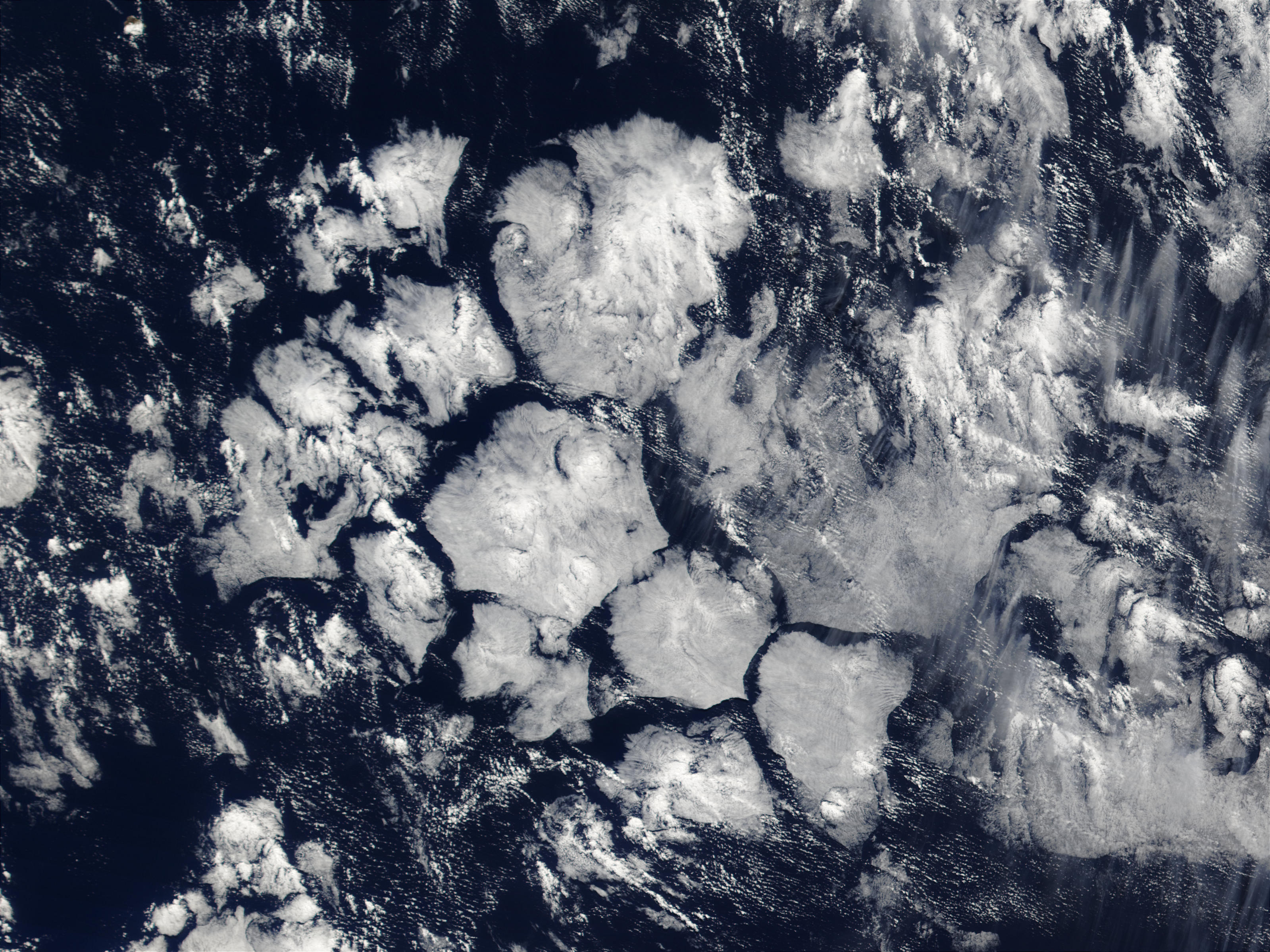 This Moderate Resolution Imaging Spectroradiometer (MODIS) image from June 6, 2002, shows the interesting clouds produced by an atmospheric phenomenon known as "closed Rayleigh-Binard convection cells." These cells, or parcels of air, often occur in roughly hexagonal arrays in a layer of fluid (the atmosphere often behaves like a fluid) that begins to "boil," or convect, due to heating at the base or cooling at the top of the layer. In this image, the convection is due to strong cooling of the cloud tops, which are radiating heat into space through the very dry air above the clouds.

The cells are named after the French scientist HenrC- BC)nard, who first described them in his doctoral thesis in 1900, and the Englishman Lord Rayleigh (John William Strutt), who gave the first theoretical explanation in 1916. Rayleigh showed that convection occurs when the difference in temperature between the bottom of the cloud and the top-the vertical temperature gradient-exceeds a critical value determined by the ratio of buoyancy and friction. That threshold is called the "Rayleigh number." When the Rayleigh number is exceeded, the parcel of air becomes unstable, and the hottest parts of the parcel want to rise, while the coldest parts want to sink. Clouds are formed where the air rises.

In "closed" cells like those pictured here, air is rising in the center, andsinking around the edges, so clouds appear in cell centers, but evaporatearound cell edges. The reverse flow can also occur: air can sink in thecenter of the cell and rise at the edge. This process is called "open cell"convection, and clouds form around cell edges around open centers, whichcreates a lacy, interlocking pattern.

Closed and open cell convection represent two stable atmosphericconfigurations-two sides of the convection coin. Once the atmosphere hasadopted one of these configurations, it is fairly straightforward to predictthe resulting cloud pattern. But what determines which path the "boiling"atmosphere will take? Apparently the process is highly chaotic, and thereappears to be no way to predict whether convection will result in open orclosed cells. Indeed, the atmosphere will flip between one mode and anotherin no predictable pattern. This sort of unpredictability is the hallmark ofchaotic systems, an uncertainty that is not simply due to the limitations ofour models or shortcomings of our scientific techniques, but rather to aninherent randomness or unpredictability of the system itself. If chaos is atthe heart of the movements of the atmosphere, perhaps we should all beshowing our weather forecasters a little more understanding.

Thanks to Robert Cahalan, NASA-GSFC, for help with image interpretation.