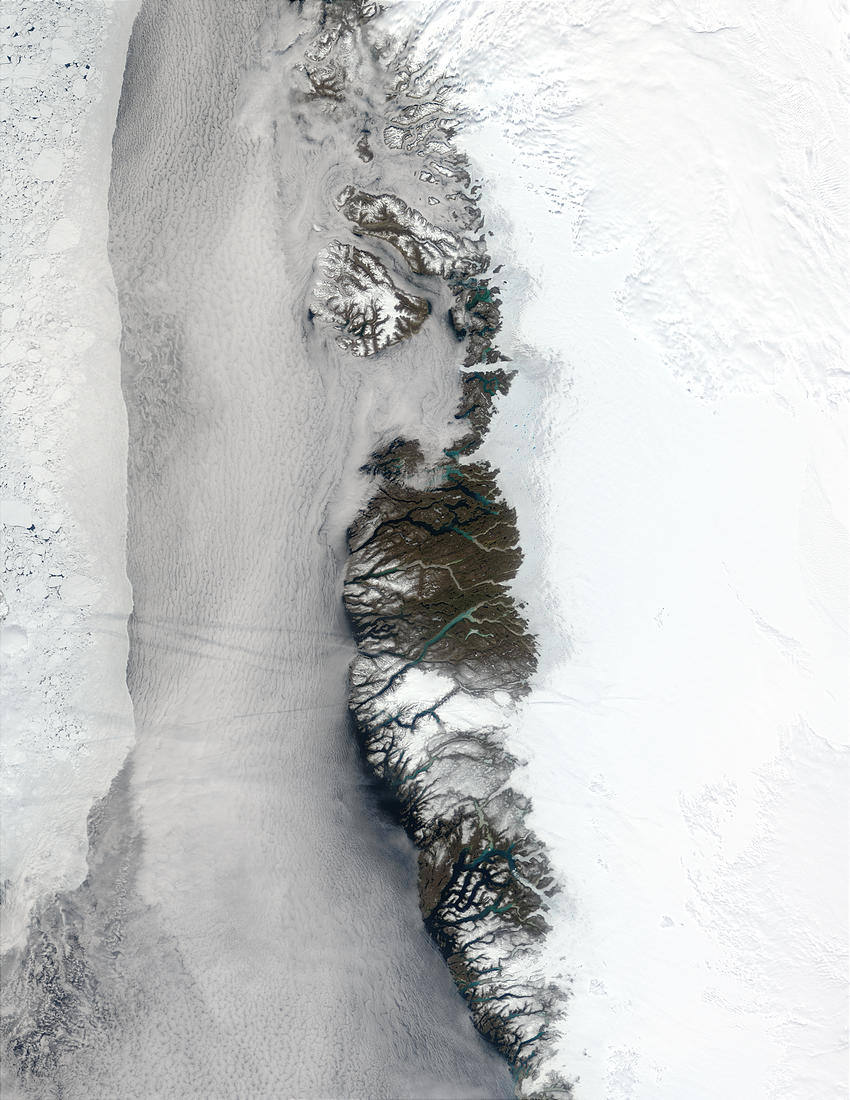 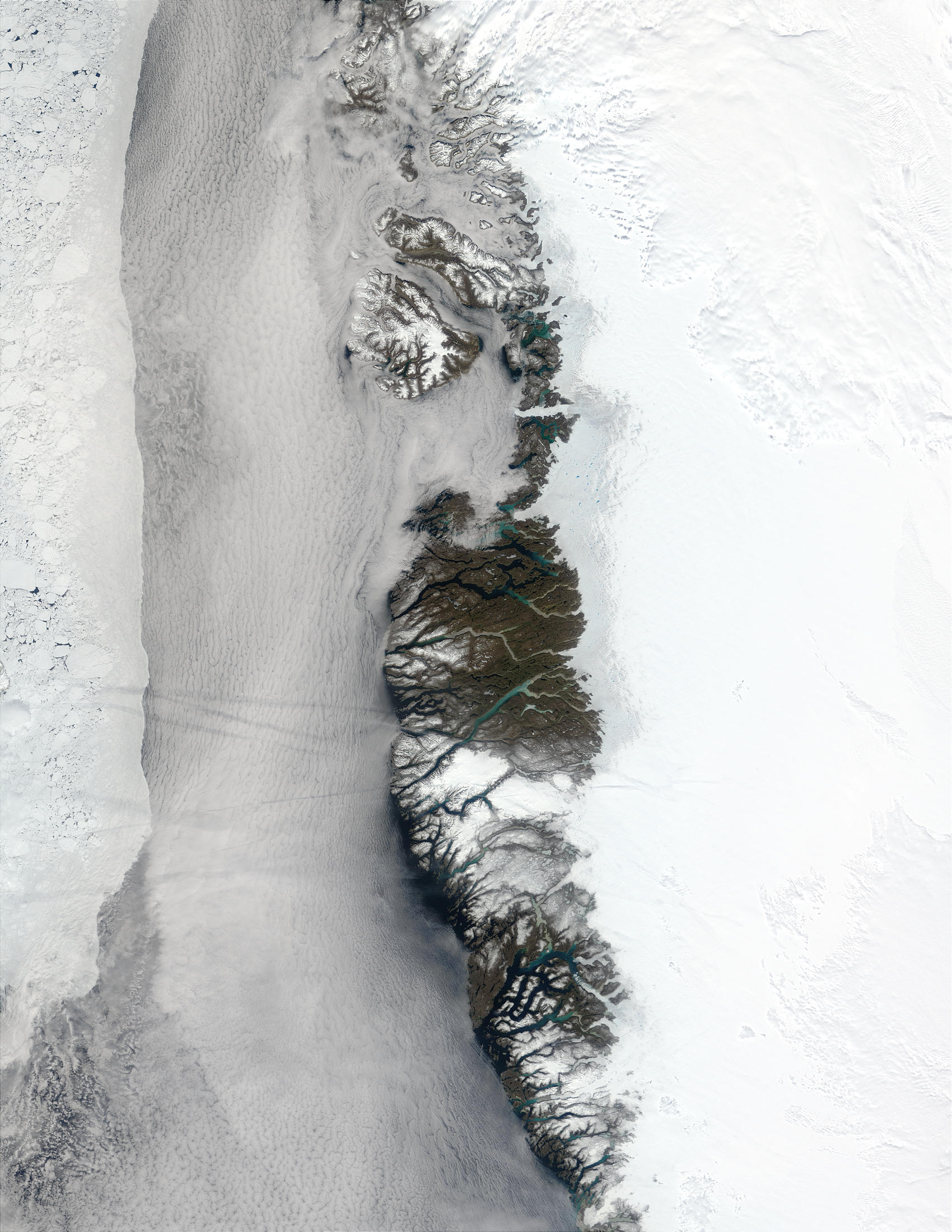 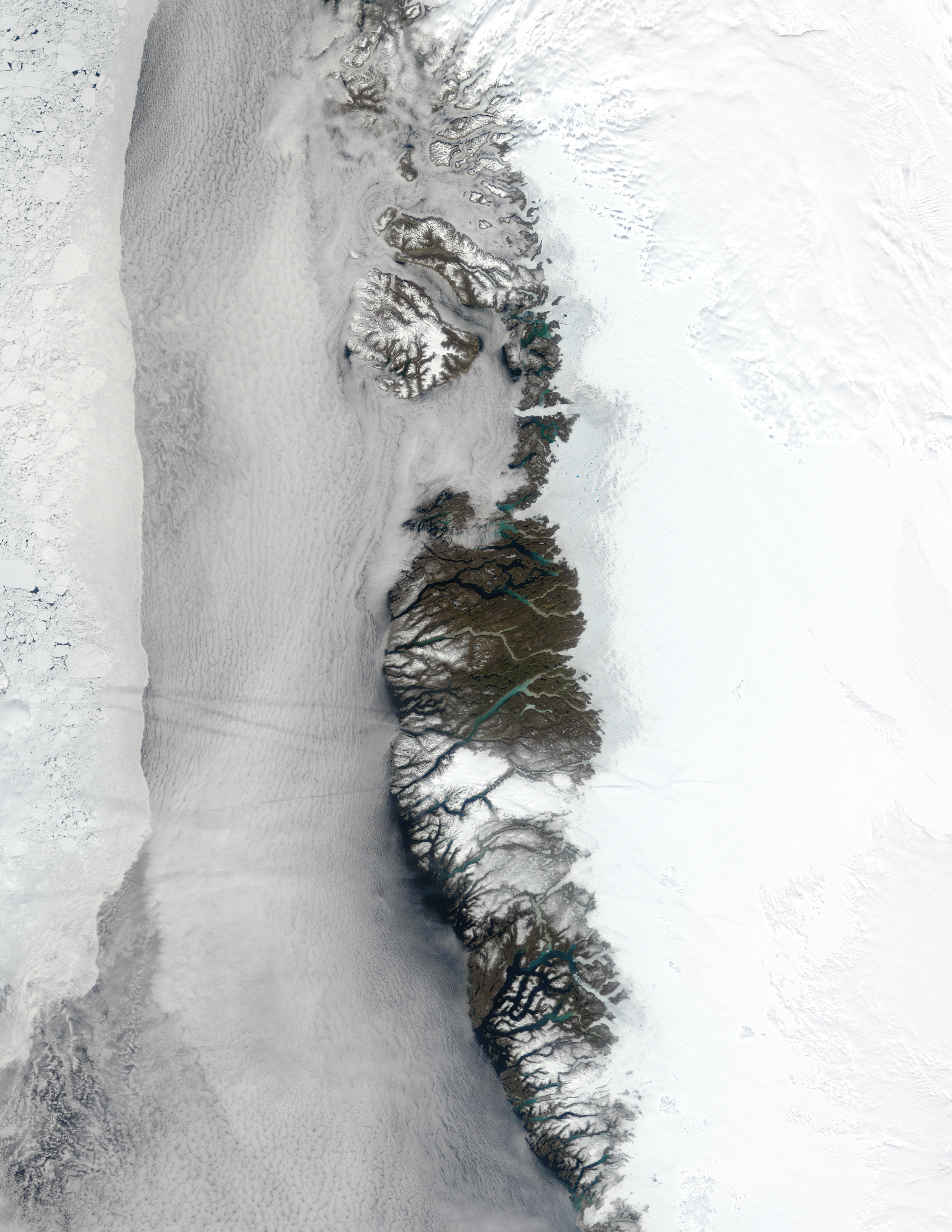 What might at first be mistaken for a series of images showing the approach of summer on the edge of the Greenland ice sheet in fact shows an increase in melting over the past several years. The three images above show the melting in June of 2001, 2002, and 2003. Since 2001, the amount of melting along the edges of Greenland’s ice cap has increased significantly.

On June 14, 2001, the brown surface of the rocky, exposed coastline is still mixed heavily with the patches of snow, and Qeqertarsuaq Island (near top center) is almost completely snow covered. On June 13, 2002, Greenland's west coast along the Davis Strait was decidedly less snowy than the previous year, and on June 17 of this year, the difference was most dramatic, with the snow-free area extending much farther south than it did in 2002 or 2001.

Even more pronounced than the differences in completely snow-free areas, however, are the increases in the total area caught in the act of melting--a translucent area sandwiched between the bare ground near the coast and the solid white of the interior of the continent. The grayish cast to the ice in that area indicates that the surface of the ice sheet is saturated with liquid water. This translucent area is dotted with meltwater ponds that are scattered like hundreds of blue jewels across the ice sheet’s surface. Barely visible in June 2001, the melting area increased significantly in 2002, and again in 2003, by which time it stretched farther south than in either previous year. The large images (linked above) show a large portion of Greenland’s west coast, and a reduction of snow cover from 2001 to 2003.

Scientists recently documented that the seasonal thaw along the margins of the Greenland ice sheet has been starting much earlier in the year and impacting a larger area than in the past quarter of a century. Sea ice in the region has been declining at the same time. (Read Vanishing Ice for more details.)

These images are based on observations from the Moderate Resolution Imaging Spectroradiometer (MODIS), one of five instruments aboard NASA’s Terra satellite. In the false-color images, ice is bright blue, vegetation is green, bare ground is reddish-brown, clouds are white or light blue, and standing water is dark blue or black.