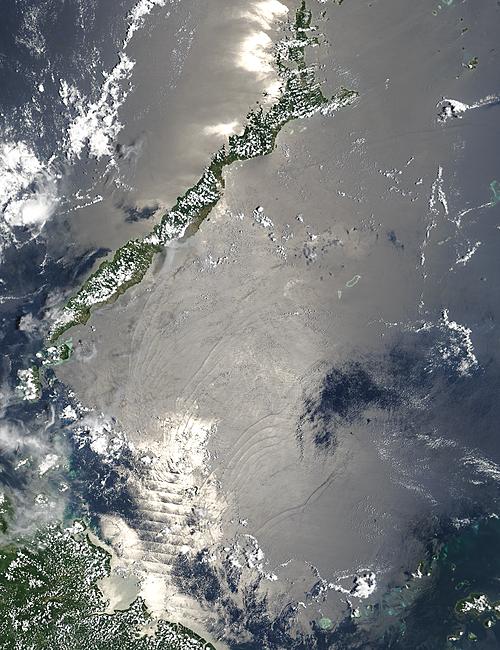 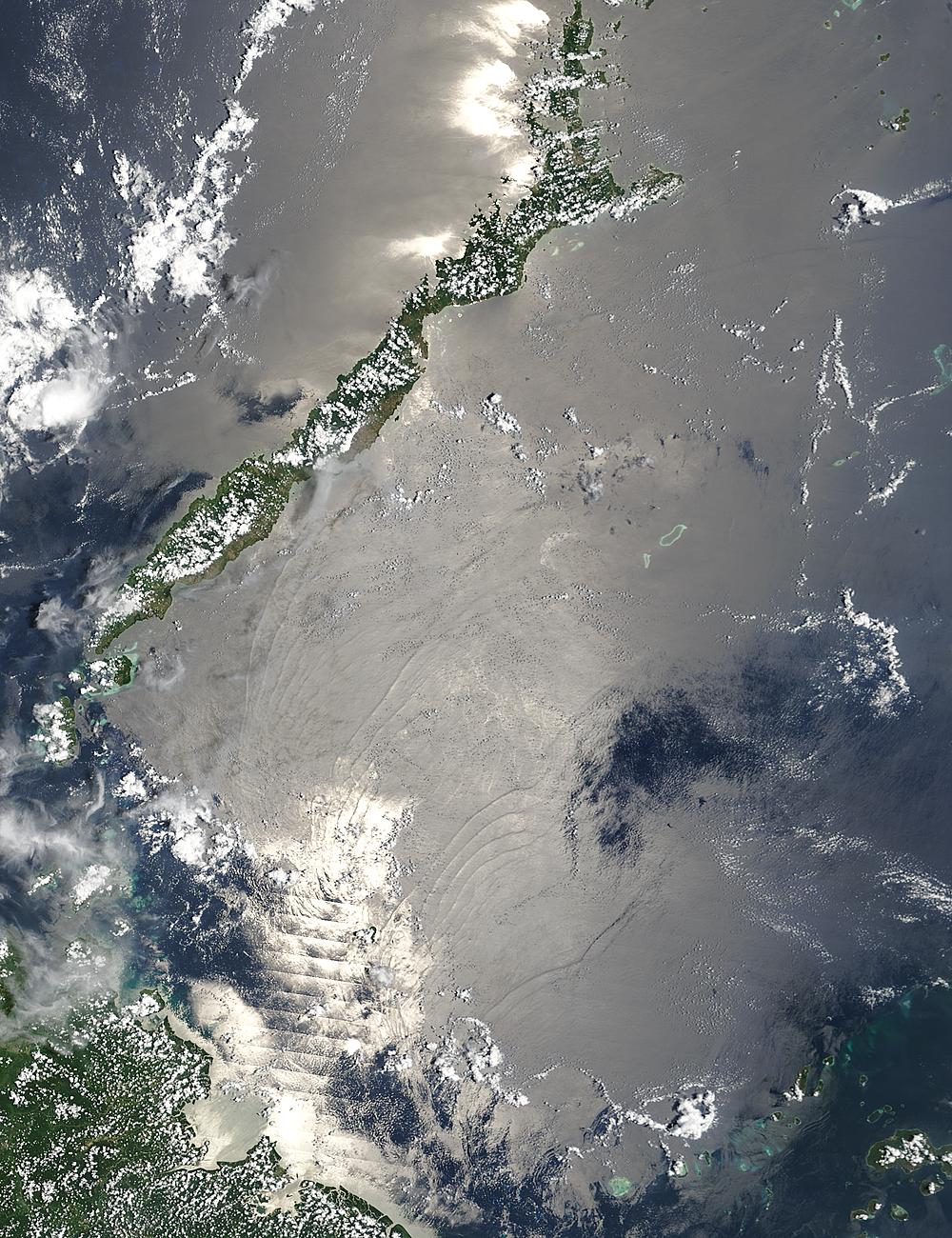 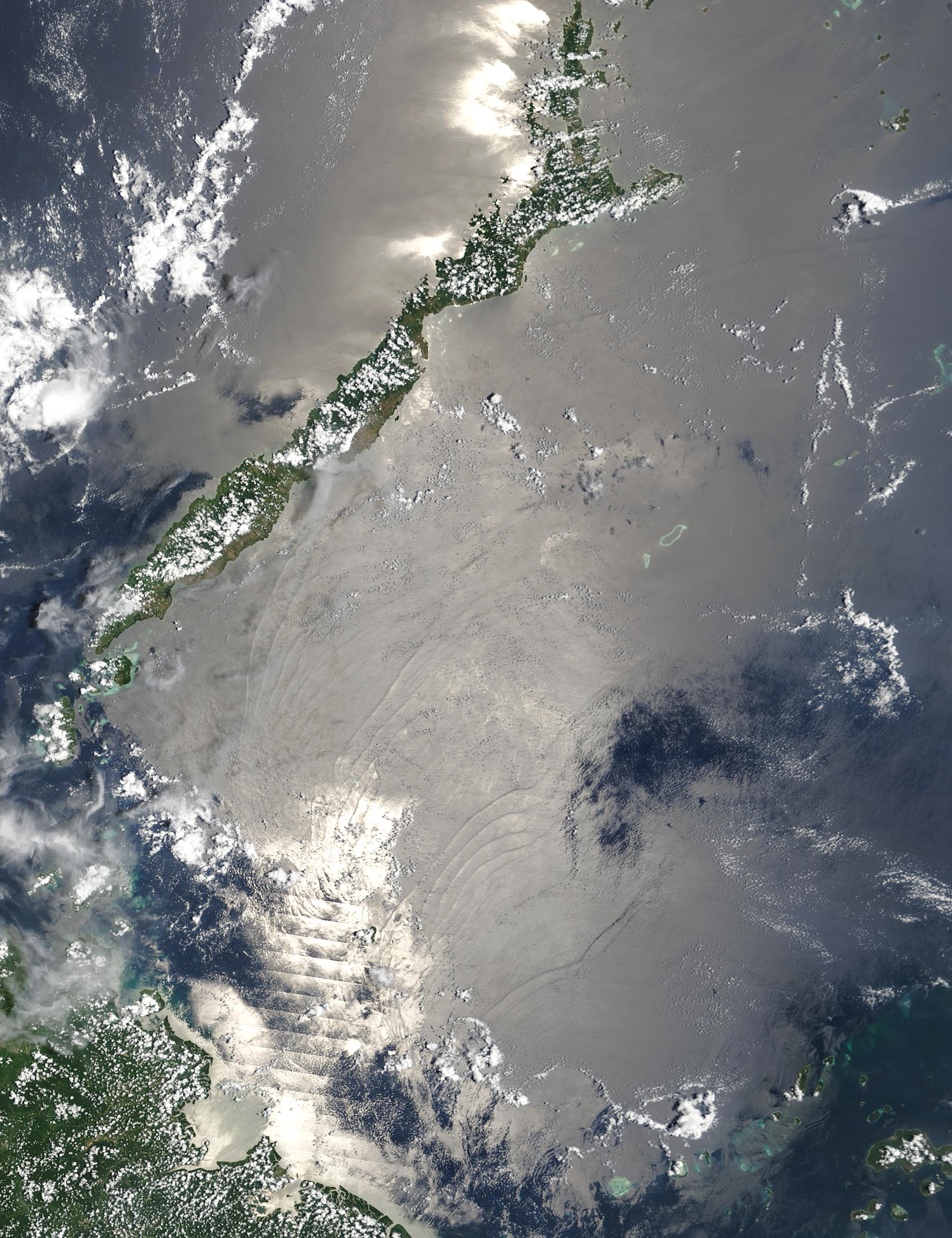 Internal waves in the Sulu Sea, between Malaysia and the Philippines

Reflected sunlight forms a silvery mirror on the surface of the Sulu Sea in this Terra MODIS image acquired on April 6, 2004. The sunglint highlights internal waves moving across the sea toward Palawan Island.

Surrounded by the islands of the Philippines and Malaysia, the Sulu Sea forms a near perfect circle. On average, the Sea is over 4400 meters (14,436 feet or 2.7 miles) deep, but on its southern end, the Sulu Archipelago raises the sea floor to a depth of 100 meters (328 feet or 0.06 miles). On the other side of the islands, the sea floor drops off again in the Celebes Sea. The set-up is perfect for generating internal waves.

Internal waves form when the lower layer of a body of water is dragged over some obstacle. Like all ocean water, the Sulu Sea is divided into layers of different temperatures and densities. The lowest layer is made up of cold, salt-dense water, and the top layer is made of warmer, less salty water. When the tide pulls the lowest layer over a barrier, a wave develops between the layers. Called internal waves, these waves affect surface currents, and are visible from space. The waves have also been called solitary waves because each appears as a long, continuous wave moving alone across the surface of the water.

In the Sulu Sea, internal waves form when the tide pulls the ocean water from the depths of the Celebes Sea across the shallow barrier of the Sulu Islands, seen in the lower right corner of the image. The open depths of the Sulu Sea allow large internal waves to develop and move northeast toward Palawan Island. The waves can stretch across 25 to 35 kilometers (15 to 22 miles), some of the largest ever observed, and can last for two days.

This image shows the entire lifecycle of internal waves in the Sulu Sea. The waves form packets of four waves during each tide every 12.42 hours. In the lower right corner, a packet containing just two waves is developing in front of the Sulu Islands. To its northeast is a full packet of four waves. The next two packets have been slightly distorted as the right half of the wave moves quickly through deep water and the left half slows over a shallower shelf. Finally, the waves terminate as they break on Palawan Island.