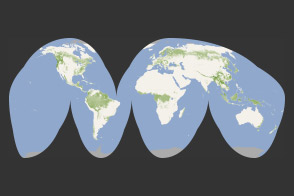 Using a combination of NASA satellite images and laser data, scientists have produced a first-of-its-kind map that details the height of the world’s forests. The map may help scientists build an inventory of how much of the carbon dioxide people release by burning fossil fuels gets stored by trees around the world.