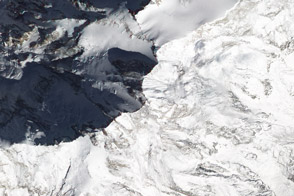 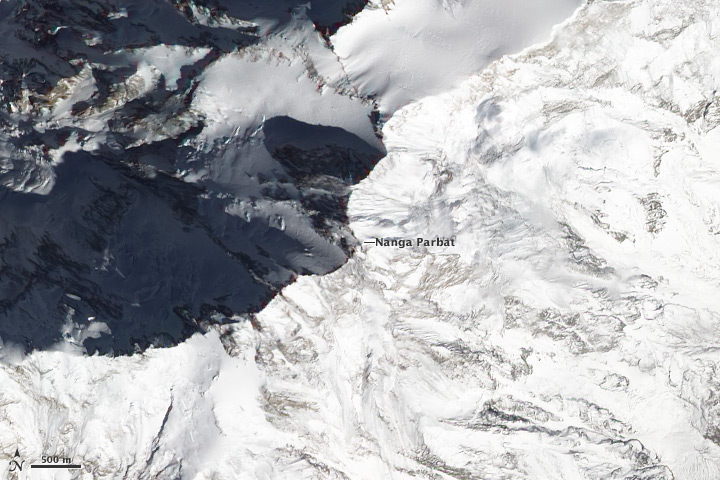 Meaning “naked mountain” in Urdu, Nanga Parbat is a reference to the generally snow-free south face. Known as the Rupal face, this is the world’s largest rock wall, rising some 4,700 meters (15,000 feet) from its base to the summit. The other faces—the Rakhiot face and the western Diamir—are also extreme. In the image above, the Rakhiot face is in shadow to the north, the Diamer face is to the east, and the Rupal face is to the south.

In the first-ever attempt to climb an eight-thousander, British mountaineer Albert Mummery ascended Nanga Parbat in 1895. Of the south face, he wrote: “The astounding difficulties of the southern face may be realized by the fact that the gigantic rock-ridges, the dangers of the hanging glacier and the steep ice of the north-west face—one of the most terrifying faces of a mountain I have ever seen—are preferable to the south face.”

Mummery opted for the Diamir face instead, but disappeared, presumably killed by an avalanche. Subsequent expeditions fared no better, with an avalanche killing 16 men in a German team in the early 1900s and a storm killing another nine in 1934. Austrian Hermann Buhl was the first to make it to the summit, climbing solo and without oxygen in 1953. He followed a ridge on the Rakhiot face in what has gone down in mountaineering lore as one of the most remarkable climbs of all time.

Just as notable as Nanga Parbat’s climbing history is its geologic history. “There is no other mountain in the world that is rising as fast as Nanga Parbat,” explained Mike Searle, a University of Oxford geologist.

As of March 2012, there had been a total of 335 successful ascents of Nanga Parbat. Sixty-eight had died trying—a fatality rate of about 20 percent, making it the third most dangerous eight-thousander.